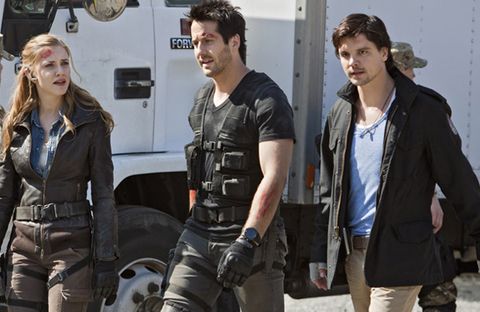 THE ONE WHERE Connor Temple (Andrew Lee Potts) returns and brings an ARC teammate and an Albertosaurus with him; Evan faces the dinosaur (this time it’s not a hallucination) that killed his wife; Toby is dying from the Brontoscorpio poison with Mac at her bedside; Dylan saves Toby; Leeds redeems himself.

VERDICT So here we are at the end. This really is a fantastic final episode of the series: it leaves you wanting more and it’s a shame the show has been cancelled (tear, sob).

The acting is as good as ever and the slow motion shooting style from director Martin Wood escalated the intensity and emotion of the scenes, and really helped to keep you engaged in what was happening to the characters. You were also really able to get a good look at the amazing special effects of the Albertosaurus and the shimmery anomalies, as well as all the special effects in the action sequences with the explosions. But the slow-mo didn’t slow things down at all; the episode for the most part was fast-paced and never boring.

Fans of the original Primeval were treated with the return of Connor Temple, who we now see leading his very own ARC team across the pond, chasing creatures and protecting humanity. It was a cool twist to find out that it was his team that chased the Albertosaurus from that timeline through into the anomaly junction and into Connor’s timeline which caused the death of Brooke. Whoops. But Connor’s character was written cleverly into the story arc of New World , giving his character more purpose than just a guest star from the original series to help grab more UK viewers to watch the new series. Connor’s presence in this episode almost steals the spotlight from Evan (Niall Matter) with his charisma and witty dialogue. But whose story is more interesting, Connor or Evan’s? Now that Connor is leading his own ARC team, maybe it’s time he gets his own Primeval show?

While Connor did provide some humour and nostalgia, there was no shortage of dark and serious moments: Toby with tubes down her throat and fighting for her life; Evan having to relive the death of his wife; Mac presumably dying to save “other” Evan . Primeval: New World is a much more adult series than the original Primeval and that really shows in this final episode. The story really isn't about the Albertosaurus and the other creatures, it was about the characters and how they have developed: Lt. Leeds finally redeems himself in this episode when he helps Mac pose as a Project Magnet military officer, Evan learns to move on from his wife’s death, Mac and Toby discover they are best friend’s forever, and even Colonel Henderson Hall realises that Evan was right (although he realised it a little too late and was killed by the Albertosaurus.) Lots of development, drama, and loose ends tied up just in time. Although we are still left with a cliffhanger at the end with a few new questions.

While the original series ARC team really focused on protecting the creature of the week, New World was about character drama. This episode Evan finally gets some closure and kills the dinosaur that killed his wife. Most of the creatures in New World were either killed by SPG or by Project Magnet, which really doesn’t make it much of a family show but it really worked as an adult show full of action, violence, death, and drama. Sorry kids, but the dinosaurs are dead... again.

The team got to use some pretty cool weaponry this episode like the flamethrowers especially (why doesn't Lt Leeds ever get any cool weapons, eh?), and you have to admit is much more fun than a taser or tranquiliser. The SPG mean business! More violent, but it makes things a little more serious that way. That Albertosaurus needs to be put down!

It was a disappointing ending, only because the show has been cancelled and the episode ends on a cliffhanger with the anomalies disappearing because of something in the past being altered. Could it be that the Albertosaurus didn’t kill Brooke? Did Mac not die while trying to save Evan from the dino? He was also wearing a different uniform jumping through the anomaly this time to save Evan, than what “other Mac” was wearing (the ARC jacket). We might never know what caused the anomalies to disappear and what will be different, so now we can only hope that Primeval: New World doesn’t go completely extinct and is picked up in the near future by another network.

CREATURE OF THE WEEK That one really fast, really mean Albertosaurus with the messed up left leg.

DINO FACTS The Albertosaurus had two small blunt horns in front of its eyes used for aesthetic purposes to attract mates and intimidate enemies. It’s not the size of your horns that count, it’s how you brandish them.

BEST LINES
Connor: “I got stuck in the Cretaceous for over a year once.”
Dylan: “A year?!”
Connor: “Uh huh. I would not recommend it.”

Primeval: New World has finished airing in the UK on Watch