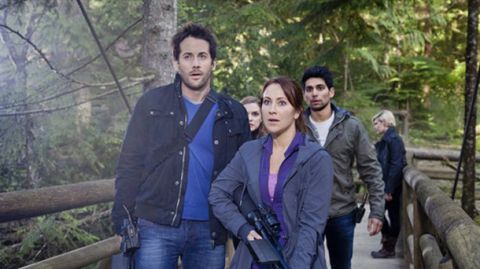 THE ONE WHERE A photo shoot of “Fatal Babes” is interrupted by an anomaly; Toby is reunited with her ex-girlfriend.

VERDICT Insanely hot girls being photographed in a cabin in the woods seems like the start to a bargain-bin horror film, but “Babes In The Woods” delivers some fun action sequences, once the dinosaurs and the SPG get involved. Did we mention there are hot girls?

You might get excited because of the girls, but what should really get you going is the dinosaurs; the pack of Ornithalestes are fast – but not faster than a speeding car – big, and can rip a photographer to shreds. While the characters provided humour and substance, the dinosaurs brought the fun and action. It might have been Angelika’s first time in the field, but she didn’t hesitate giving a karate kick to the dinosaurs face when she was in danger. That moment was a bit cheesy and obviously set-up right at the beginning of the episode, but it was still pretty awesome to watch a dinosaur get kicked in the face. Who would have thought that Ange could be that hardcore? The dinosaurs stalking the SPG team also ramped up the suspense, especially now that we get the idea that no team member is safe from getting eaten off the series. It was a close one for Ange.

While Evan, Dylan, and Ange slowly worked their way to the anomaly dragging a tranquilized Ornithalestes (although their pace was slow, their conversation remained entertaining), Mac was finding out a lot more about Toby than she has ever shared with the group, and finally realises why his attempts at flirting with her have always fell flat. Toby’s character has been underused in this series so far, but this episode really explores her past, most notably her time in university as a “Fatal Babe”, and we learn that she has an ex-girlfriend in the group, Natalie. Kudos to the show for not only exploring Toby’s sexuality, but for celebrating it. While the episode is fun and action packed, it is Toby’s character development that gives the episode substance. Her character is more likeable than ever. But will we see her ex, Natalie, in future episodes? Or was she only introduced to help develop Toby’s character? Either way, it’s progressive of the series to introduce a gay character, and promote difference as good and beautiful.

Other great moments are when Toby has to tase her ex (don’t we all wish we could do that to our exes?), though by the end she and Natalie are kissing and making up in front of the shimmery anomaly (so romantic!). Then was the best psych-out so far in the series, when what you assume is an Ornithalestes stalking Mac, Toby, and Natalie actually turns out to be a huge bear instead. Canadian camping survival tip: when you are confronted by a bear in your path, throw your arms up into the air and yell, “Go away!” over and over... that should work. Does Canada seem scary yet? The location for this episode really showed the beauty – and wildlife – of Vancouver. The anomaly really did pale in comparison.

While the special effects were spot-on – the dinosaurs looked nightmarish but realistic – the coolest thing about this episode was the character development. There’s an obvious love triangle forming between Ange, Evan and Dylan, and Toby’s sexuality and past are no longer a secret. Mac also seemed more lighthearted this episode, feeling less angst over Sam’s death. It was probably because he was distracted by naked pictures of his coworker. Haven’t we all been there?

The one thing missing was Lt Leeds: we need to see more of that guy! Evan clearly still has his reservations about him – and for good reason – when he hesitates to allow Ange to call Leeds for a lock-down of the anomaly site. Toby might have had been hiding secrets from her team, but Lt Leeds seems to be hiding dark secrets and intentions that may be to harm the SPG team and the creatures coming through the anomalies. Awww, and he seems like such a sweet guy when he’s faking it.

This is a strong episode, with the perfect amount of fun, humour, action, dinosaurs, and naughtiness. We're at the half-way point of the first season, so let's hope they can keep it up.

CREATURE OF THE WEEK Ornithalestes, a theropod dinosaur with feathers and sharp teeth.

TRIVIA The cabin used for the Fatal Babes photo shoot in this episode is the same cabin that belonged to Jack O’Neill in Stargate SG-1 episode, “The Curse”.

LOL Mac trying to download Toby’s pictures from the group's website while she’s sitting right beside him.

HIGHLIGHT The bear, which for a Canadian can be far more terrifying to come across in the woods than a dinosaur.

GROSS! There are some nice close-ups of the partially-eaten photographer. Angelika almost voms when seeing the body.

BEST LINES:
Evan: “You can’t scrub the whole Internet Toby, And you should know by now that you can be whoever you want to be. Doesn’t matter to me.”