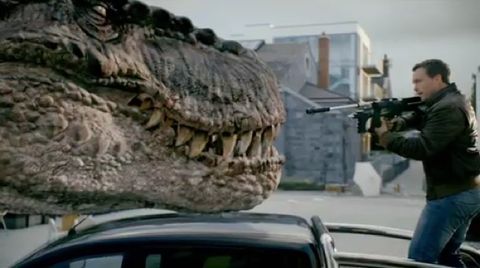 The beginning of the end

THE ONE WHERE Multiple anomalies open up around the world unleashing stock footage onto the news networks.

VERDICT Primeval appears to be building up to one hell of a season (series?) climax with an episode that doesn’t skimp on the dinos or the big game changing plot bombs. It's a great, action-packed, swaggering, roaring beast of an installment. You can’t help wishing the show had been this much fun when it was premiering on ITV1 earlier this year. We may not be pondering the end of the show if that were the case.

Once again, some excellent FX sequences provide the highlights. Finally, a T-Rex! And he’s dead impressive. It does seem a slight shame that he’s only a bit-parter in an episode packed with so many other off-the-peg CG creatures, when surely the king of the terrible lizards deserves his own showcasing story. But hey, at least he heralds in the fact that now the whole world knows there are dinosaurs popping into our time stream (the ARC spin doctors have clearly been very successful in creating cover stories so far, but even Lester seems to realise a T-Rex is a PR exercise too far). The pterosaurs also deserve a special mention for killing off April. About blimmin’ time.

Lester’s back with a vengeance and more acerbic than ever and hurrah for that. Abby and Connor have stopped arguing. Hurrah again. And Emily raises the question of whether Matt’s action will stop or actually cause the dark future that awaits… though the idea promptly gets swept under the carpet again. Pity, really, because Emily hasn’t really had much else to contribute since coming back to the future.

While the episode fires on so many levels, it does sputter here and there. The last quarter relies too heavily on lots of running around, captures and escapes. The global threat of the mass of anomalies opening never quite feels apocalyptic enough. The ARC troops seem amazingly thin on the ground. Again. Jenna suddenly leaving the safety of Matt’s car and running back for her dead mate smacks of the kind of stupidity that only ever afflicts people in dramas that need to manufacture some tension. And it's a bit lazy for Philip to pull the same “I had a contingency plan in case Connor turned against me” twice inside 20 minutes.

If this is the final series of Primeval , at least it’s going out on a high.

MONSTERS OF THE WEEK Oooh, loads. We see the team encounter a T-Rex, a flock* of Anurognathus, a Kaprosuchus (the one that attacks Connor in the car park), a tree creeper (the one that attacks Lester’s car**) and a pre-Cambrian carnivorous worm***. We also catch glimpses of a woolly mammoth and a spinosaur on news footage.

* Not sure if there’s a more accurate group noun for pterosaurs.
** These anomalies like appearing in car parks, don't they. Car parks are the new gravel pits
*** Not that we actually see it…

SPECULATION Could “convergence” be another possible explanation for the “spaghetti junction” of anomalies that appeared way back in episode 1.4?

BEST LESTER MOMENT His pep talk scene with Jess, including the classics, “I think it’s probably the nicest thing I’ve ever said to anyone, including my wife,” and, “What have you got for me in the field? Preferably something cuddly and vegetarian as this is my best shirt.”

BEST LINE
Connor: “As very last minute attempts to save the end of the world go, that’s very bureaucratic.”