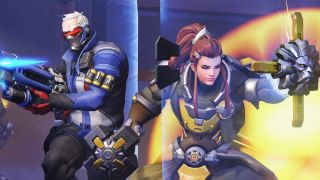 The update has officially gone live, and Sigma is playable!

For several months, professionals, casual gamers, and every couch competitor in between have felt the aggravation of an unbalanced Overwatch match, as the dreaded GOATS meta held the game in a vice-like grip. GOATS is a style of play (named after the team who used it to dominate open division in 2018) where teams run three support players and three tanks, completely ignoring the damage per second (DPS) slots. It's super effective but incredibly boring, as three massive, usually shield-bearing tanks meander towards capture points while being endlessly healed from support players hiding behind their hulking frames. It's been a dominating force in gameplay for the last several months - such a force that people have quit the game out of frustration.

Enter role queue, which requires both teams to bring a balanced 2-2-2 (two DPS, two tanks, two supports) format to every game. It's dramatically changed the way Overwatch League is played, inciting the resurgence of heroes that have long lay dormant while GOATS reigned supreme. And now it's coming to PS4, Xbox One, and PC during the role queue Beta Season.

The Beta Season drops August 13 and will run until September 1, the start of Season 18 of competitive mode. During it, players will complete placement matches for each role separately, and be given three separate skill ratings based on those placement matches. When queueing up for competitive games, players will have to choose what role they want to play before entering a match, and will be where they're needed. Players who prefer the fast-paced, run and gun DPS characters have already raised concerns that the queue for DPS heroes will likely be far longer than those for support and tank heroes. Naturally, support and tank players who have spent years complaining about uneven matches that don't support team play (ya know, when one person plays support and five other people play damage heroes and complain that they aren't being healed), are mostly excited for the change.

Overall, the responses to the role queue announcement have been mainly positive, but still somewhat mixed, with some people suggesting the Overwatch League is dictating the game's format for all, and others commending Blizzard for making the game fairer. Fans of the Overwatch League report the 2-2-2 role lock has dramatically changed the pro games for the better.

How do you feel about the new role queue in Overwatch? The Beta Season starts today - expect reactions to roll in. Oh, and there's a rumor that the new tank hero Sigma will drop in the update as well. Stay tuned.

Prepare yourself for role lock by brushing up with our Overwatch tips - 8 top tricks to start your winning streak.