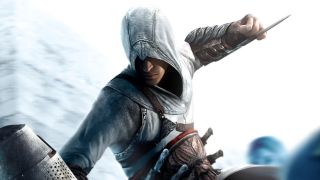 Assassin's Creed is one of the biggest video game franchises in the world more than a decade after it debuted, and original producer Jade Raymond has done pretty well too - but she's still amazed to see how far her co-creation has come. Raymond, who is now general manager of EA Motive Studios (which includes several of the publisher's upcoming Star Wars projects) talked about how it felt to look back in a keynote interview at Develop: Brighton earlier today, attended by GR+'s Alex Avard.

The Guardian's Jordan Erica Webber asked Raymond if there's any one recipe for crafting a successful video game series, and Raymond got real for a moment before diving into her answer.

"I've gotta be honest, I'm still surprised about how successful Assassin's Creed is and how it took on a life of its own," Raymond answered. "When we started working on it, we did have a plan to make three games. We wanted to, we were super excited. And we also felt like since we were getting this great opportunity to create a new franchise from scratch, and a brand from scratch, we really wanted to create a sort of franchise meta-infrastructure or story engine if you will, so that the franchise could live on."

Raymond explained that the team also spent time thinking about how it could keep making more Assassin's Creed beyond the initial trilogy without getting bored. That went for the entire franchise: books, comics, movies (you can't win them all), and other things that brought people in from beyond the core Ubisoft teams.

"And so we designed the franchise as a kind of sandbox for creatives, where I was hoping that we could hand off the keys to other professionals and they could create their own thing within it," Raymond said. "So as long as you pick a pivotal moment in history, and you explain what was happening historically through the assassins, then it's an Assassin's Creed game. Then within that people can basically play with any historical period they want as long as its revisionist history telling you about this period of time and explaining that the assassins were behind it."

Both Assassin's Creed Origins and the upcoming Assassin's Creed Odyssey largely predate the official formation of the Assassins, but they follow the same philosophical precepts: telling stories about how a few secret societies shaped the world we know today across thousands of years. Also, sometimes there are ancient god aliens.

Take a trip through Assassin history with our ranking of the best Assassin's Creed games.