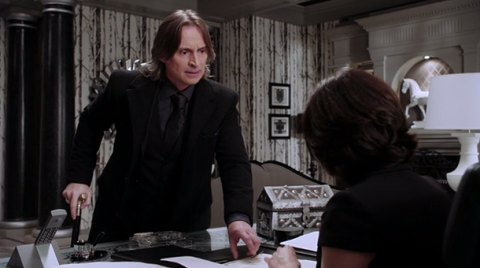 THE ONE WHERE In the past: We see a little more of the bonding that took place between Belle and Rumplestiltskin, as she defends Robin Hood from the Dark One's revenge after the bowman steals a magic wand from Rumple's palace. As it turns out, Robin needed it to save a pregnant Marion, and Rumple is so moved he spares their lives... proving to Belle that he's got some good in him after all. In Storybrooke: Mr Gold decides to spend time with the amnesic Belle to see if he can build up a relationship with her again – but unfortunately Regina intervenes, casting a spell that returns Belle to her curse-self, a flirty barfly named Lacey. Gold continues to woo her by being all sweetness and light, with no success until he shows his true colours. Apparently the sight of him beating up the Sheriff of Nottingham turns her on – yup, Lacey has issues! Meanwhile, Regina discovers that the Dwarves and the shrunk-down giant, Anton, have been growing magic beans.

VERDICT Any regular reader of these reviews will already know that I have a soft spot for Rumple and Belle (to use the proper fannish term, I “ship” them). It's hard not to, really, when both Robert Carlyle and Emilie de Ravin are so effortlessly likeable in their roles. When you see Belle give Rumple a great big hug after he spares Robin's life, it's enough to make the most hardened viewer go “Awwwwwww.” Which is why it's such a shock to see Belle transformed into the promiscuous, uncaring Lacey, and so incredibly endearing to see Gold desperately trying to win her heart by doing all the wrong things. (Incidentally, mate, when you sit down with a girl in a cafe and order her food and drink without asking her what she wants, that's a huge no-no. Even if you are used to doing that because you've eaten there before – she's not the same girl, is she? Duh.) Also, the fact that Gold goes to David, of all people, for help in romancing his former girlfriend is priceless – it's like Regina asking Snow for make-up tips!

While Rumple and Belle dance around each other – not in a “Tale As Old As Time” kind of way, mind you – it's good to see that Snow's got a bit of her old “oomph” back as she takes charge of her life again. She now wants to go back to the Enchanted Kingdom so that she can restore it to how it was, ridding it of evil and hopefully cleansing her heart. This entails growing magic beans so that she can create a portal home, but that leaves Emma in a bit of a bind: does she go with her parents or not? Imagine living in a world without electricity, hot showers, television, medicine... and one which has wicked witches and ogres to boot! We'd stay here (imagine never being able to see the Avengers: Age Of Ultron !), but Emma's not so sure. It's a lovely dilemma, though, even if it looks as if Regina is going to scupper it.

Oh yes, and then there's Robin Hood. Played with a touch of Errol Flynn derring-do by Tom Ellis, he doesn't get very much to do, which is sad, and it's also a bit of a swizz that he has a magic bow with arrows that never miss their target – isn't he supposed to be an expert bowman without the help of magic? Oh well. We actually spend more time with the Sheriff Of Nottingham, both in the Enchanted Kingdom and in Storybrooke, and he's a total weasel. Mind you, he doesn't deserve the beating Rumple gives him – in fact, that beating is so brutal we're amazed it aired in a family show...

WHERE'S THE BLOOD? Speaking of a family show, when Robin is in Rumple's clutches we hear him screaming as he's tortured, and Rumple comes out of his cell with an apron smothered in blood. Belle even mentions that his other aprons are drying on the line, implying that he's worn several before this and covered them, too. And yet when we see Robin when Belle rescues him, there's a little bit of blood trickling down his face and upper chest and that's about it. Where's this “skinning alive” that Rumple was on about? Unless he'd done it and magicked the poor guy back to health again so he could do it over and over... now there's a thought. Ouch. A not-so-Merry-Man.

HOODWINKED [SPOILER FOR SEASON THREE!] Robin Hood will return for a multi-episode arc next season, although Tom Ellis (who you may have recognised from roles in The Fades , Doctor Who and Merlin) had scheduling conflicts and couldn't reprise the role. Instead the Hooded Man will be played by Kröd Mändoon 's Sean Maguire... which also means that Once Upon A Time will have cast two Robin Hoods who formerly starred in EastEnders !

LEAVING HER HANGING... Several episodes ago, when he was on the verge of dying, Rumple called Belle and told her how much she meant to him. It's been a few days at the very least in Storybrooke since that happened, and yet he's only just gotten around to seeing her and putting her mind at rest. What a tease!

CALL THE FASHION POLICE! Emma and Snow turn up to inspect beanstalks wearing these ugly and misshapen black hats. At least David had the sense to leave his noggin bare, even if he was getting rained on.

DOWN THE HOLE You have to love that Storybrooke's only skeezy bar is named The Rabbit Hole. You also have to love the bartender, who looks hurt when Rumple calls his establishment “vile”. “Really not a fan of the Rabbit Hole, are ya?” he says, upset.

COOL FX The little dream sequence at the start of the episode is throwaway, except that the sight of Henry turned into a ceramic kid is wonderful. Well done to the FX department for this shot!

TREASURES UNTOLD I'm sure I'm not the first to have noticed this, but for some reason it took me until this episode to spot two of the mythical items in Rumplestiltskin's possession: the Golden Fleece and Thor's Hammer!

BEST LINES
David [about growing beanstalks]: “That way Anton can do what he does best.”
Anton: “Actually you haven't seen me play darts.”