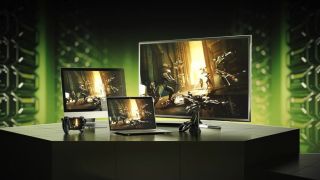 Similar to Google Stadia, GeForce Now offers an ever expanding library of titles that can be streamed directly to a variety of devices using Nvidia's cloud technology, offering install-free gaming in high fidelity with RTX support on compatible games.

Google Stadia 2020 plans include 120 new games, with over 10 launch exclusives

Unlike Stadia, however, Nvidia's cloud service offers a free option alongside a paid subscription model for Founders who want to invest $4.99 a month. The premium tier includes RTX support, priority access, extended session lengths, and the first three months for free, whereas the Free option limits session lengths to one hour.

So far, over 300,000 user have streamed more than 70 million hours of gaming via GeForce Now's beta testing phase, but Nvidia is ready to roll out the service to an even wider audience, promising high frame-rates, instant access, and true ownership of content to anyone who's interested in signing up.

You can even integrate your existing PC game library with GeForce Now's cloud service, allowing you to play your current portfolio of titles without having to install them or fiddle around with your memory banks to make room for new pick-ups.

It's quite the tempting offer, especially in light of Google Stadia's failings, so - if you're interested - feel free to find out more about Nvidia GeForce Now from its own website here.