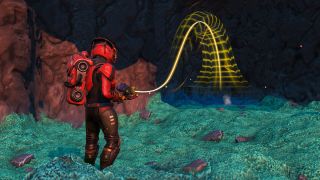 You can now upgrade your starship's inventory and ship class via new Starship Outfitting Terminals available at space stations, provided you have the Units and Nanites to spare. Not only that, you'll be able to salvage retired ships for scrap and materials you can apply to your favorite ship. It's like trading your old console in for a new one at Gamestop, but in space.

No Man's Sky has always been about interacting with the environment, and thanks to the upgraded Terrain Manipulator, terraforming is easier than ever. On top of miscellaneous optimizations, it received new visual settings like restore and flatten (basically an undo and oh-screw-it button, respectively), as well as terrain protection which can lock in your base's terrain. You'll also be able to protect more terrain edits at once.

No Man's Sky has been split between its VR and traditional version for some time, but with the Synthesis Update, Hello Games is ensuring feature parity. Photo mode, creature riding, and first-person exocraft travel are now available in all versions of the game.

Finally, we get to the lion's share of the No Man's Sky patch notes: quality of life improvements. Here's a quick roundup of the biggest ones:

Those are the headlining features, and you'll find dozens more in the full patch notes listed here.