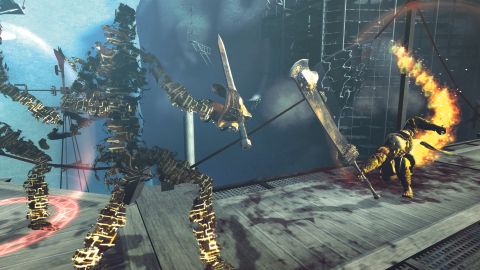 How rare it is to hear the word ‘shithog’ used in a fantasy world. Nier is a fantasy-action-RPG with the mouth of a sailor. Rolling grasslands and ominous temples put us in Zelda territory (graphically, Nier could be super high-res N64) but the script refuses to stay put. An ancient spell book, for example, is referred to as a “little bitch”. Don’t worry, the spell book says far worse things back. It’s a talking book, of course; one of many reasons Nier is the quirkiest RPG you’ll play this year.

Mechanically, Nier is remarkably well-read, borrowing from everywhere. Action-wise, our hero is of the Kratos (or, if you’re on a tight budget, Dante – of Inferno) variety: swordings, evasive dives and lashings of blood. Into this, developers Cavia mix Bayonetta-style magics, all demon lances and house-sized fists. Our hero can also fire giant red bullets. When you fire your bullets and the enemy fires theirs, Nier looks a little like Ikaruga and shooters of that ilk. Alas, all this proves to be more overwhelming than empowering; a mistake none of the title’s influences would have made.

Elsewhere, there’s a hint of Zelda in the crate-pushing puzzles and dungeon design. And the general structure – a free-roaming field dotted with temples – is a clear nod to Hyrule Field. Add to this a dash of Monster Hunter – hunting livestock and rifling through herb patches nets you the raw materials for upgrades. Too many fetch quests are spun from this, however. While the story bombs along at a good old pace, those hoping to pad the game with sidequests will have to get used to carting berries back and forth.

More interesting is Nier’s eye for direct homage. A versatile camera often subverts action on the fly. Switching to birds-eye view turns Nier’s magic blasting into a twin stick shooter, a kind of medieval Smash TV. When a further zoom shrinks hero Nier to a tiny speck on screen we’re suddenly in Diablo territory. Entering a ghostly black-and-white mansion only to find the camera fixed at awkward angles reeks of Resident Evil. Despite not elevating the action in any way, there’s a real allure in seeing what crazy thing the game does next. In this sense, Nier reminds us of Suda51’s freewheeling No More Heroes; a sort of make-it-up-as-you-go-along approach to the RPG.

Like Suda51, Cavia tread a dangerous line between mad and bad, but misstep too often to forgive. Those innovative highs only make the inevitable drops more painful.