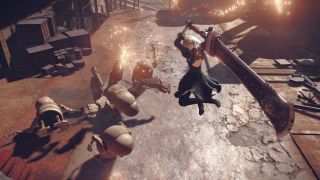 Last month, a Game of the Year-style revamp of Platinum Games' Nier: Automata was spotted in the ESRB's ratings board. Today, publisher Square Enix officially announced the game's (third) release: Nier Automata Game of the Yorha Edition is coming to PS4 and PC on February 26, 2019.

When this edition first cropped up, I pondered what it would add to improve on the Become As Gods Edition which released on Xbox One in February 2017. The answer: not much. Almost nothing, in fact. As far as I can tell, this is pretty much just Become As Gods Edition: Again, but for PS4 and PC this time.

Per Square's announcement, Nier: Automata Game of the Yorha Edition comes with the game's 3C3C1D119440927 DLC - yes, that's actually what it's called - as well as five new pod skins and a machine mask cosmetic. PS4 buyers will also receive a dynamic system theme and 15 PSN avatars, while Steam buyers will get two wallpapers. The new edition will only be available digitally on PC, but a physical version will be available on PS4.

If the Game of the Yorha Edition includes any significant improvements or additions to the Become As Gods edition, Square Enix certainly hasn't said anything about them. It's fundamentally the same game with the same bonuses, albeit with some incredibly minor cosmetics thrown in. I mean, Nier: Automata is a great game and its DLC is also worth playing, so provided the price is right, this edition will be worth it for newcomers. But as far as I'm concerned, the best part of this whole thing is this delightfully melancholy statement from director Yoko Taro:

"Square Enix has asked me for a comment to mark the announcement of the Nier: Automata Game of the Yorha Edition. Now that you mention it, Nier: Automata was first released on the 23rd of February 2017 in Japan, 7th of March 2017 in America and on the 10th of March 2017 in Europe. I have noticed something bizarre and fascinating about these numbers: if you write these dates out in long-form as 20170223, 20170307 and 20170310, then add all three numbers together, you get 60510840. If you take that total, split the digits in two down the middle, making 6051 and 0840, and then subtract the second number from the first… unbelievably you get 5211!! That’s right, a number completely devoid of all meaning! Just like life really, isn’t it? Over and out."

Everyone needs more Yoko Taro in their life. Here, the director discusses expectations, our secret selves, and the happy ending he doesn't see for himself.