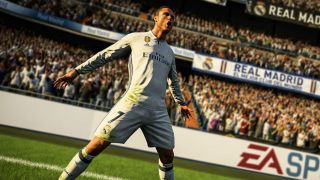 FIFA 18 developer EA Canada has unveiled a new teaser video for the game, in which you can compare the live mo-cap of cover star Cristiano Ronaldo to how it appears within the Frostbite engine.

It shows him stepping up to, and then dispatching, a free kick, with the user able to move the view around at any stage in order to contrast real life vs game. This actually sounds much more complex written down than it is to watch: See for yourself on the FIFA 18 Facebook page.

The video is a follow up to the reveal trailer, which can be viewed below.

Ronaldo, and namesake, er, Ronaldo (AKA the Brazilian original), are the focal points of marketing for this year's game, with both available for instant play within Ultimate Team as one of its pre-order bonuses.

Brazilian Ronaldo is one of many Ultimate Team legends bound for PS4 for the first time, along with Diego Maradona, Lev Yashin and Pele.

FIFA 18 is out on 29 September. To see which stars we reckon are overdue stats boosts, check out the 11 players who need a jumbo upgrade in Ultimate Team.