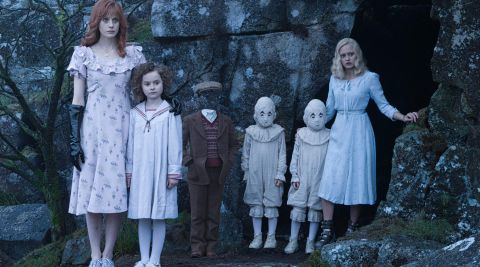 Hugely charming if somewhat cluttered, Burton’s horror-spiked YA freaks-and-a-geek fantasy proves a Home run for Asa Butterfield. There’s nothing sleepy about these ‘Hollows’…

A match made in Hollywood heaven, surely, pairing the Godfather of Gothic Fantasy with Ransom Rigg’s eccentric YA mega-bestseller, in which a houseful of mutant children battle monstrous adversaries? Yet Tim Burton’s charmingly creepy take on this time-travelling tale is less a marriage, more an enchanting high-end makeover.

For there’s so much here that resonates with Burton’s back catalogue. Alienated suburban teen hero Jake (Asa Butterfield) who flees Florida for a remote Welsh island at the story’s start, is your classic Burton boy. His grandfather Abe’s been mysteriously murdered, and the timorous Jake is determined to find out if the Peculiar children he spoke of are an old man’s fairy tales (remember Big Fish?) or a vital clue.

When Miss Peregrine’s mutant charges whisk him back to 1943 (they live in a one day time-loop, Groundhog Day-style), their plight, as well as their turreted mansion echoes Edward Scissorhands. Despite the ‘Junior X-Men’ vibe of their hidden-away life and freakish powers (including fire-starting, invisibility, and a human beehive), they’re clearly vulnerable kids.

Jane Goldman’s script is a bit of a mutant too, since Rigg’s book is a genre-crossing, quirky emo-quest. As Jake takes up Abe’s challenge to protect the Peculiars from the monstrous Wights who seek to suck out their immortality, it throws in YA emotional angst, Hugo-style retro innocence, and dark Harry Potter-ish scares.

But Burton’s rich style, and surprisingly sincere tone draw it all together skilfully. Unlike Alice in Wonderland and Charlie and the Chocolate Factory, which brought wild fantasy, surreal colour, and OTT performances into classic kid-lit, this film creates a real-world feel alongside its fantastical episodes. Jake’s tentative first-love with the feisty, free-floating air-controlling Emma (Ella Purnell) has proper teen awkwardness. Its heightened reality neatly balances out the film’s weirder black comedy, like the murderous gladiatorial doll battles of Enoch the re-animator.

Rationing the glimpses of the horror at the film’s heart, the towering, tentacled Hollowgasts (‘Hollows’ for short), also keeps the scares fresh till the final confrontations. Till then, the film is busy creating some stunning set pieces showing off Peculiar skills, like the vast underwater den that Emma’s breath creates from a sunken WW1 steamship. Or time-manipulator Miss Peregrine’s gleeful nightly re-setting of a fiery German air-raid, where the whirling slo-mo bombs rewind along with the hands of her clock.

Starry Burton regulars are in short supply, except for Eva Green’s warmly weird bird-woman Miss Peregrine, a darkly mysterious Mary Poppins figure, who is a dab hand with a Hollow-halting crossbow. It’s down to Butterfield to supply the film’s understated emotional power, getting Jake’s ambivalence and self-doubt down pat.

Torn between trepidation and the gradual unearthing of his own Peculiar power, he puts some real feeling into the film’s teen themes of self-discovery, and finding your own tribe. Keen to convey the humanity of the dozen sweet, squabbling Peculiars, the film doesn’t have the legroom to do more than show off their startling talents. Only Emma and the jealous Enoch (whose party trick is a neck-prickling Lazarus routine with a Peculiar corpse) really register.

But even battling the Wights in a climactic Blackpool Tower ballroom standoff, they’re mistake-prone kids, not human weapons. So when Samuel L Jackson’s wolfish Wight leader Mr Barron finally presides over the tween terror with jocular malice and nifty metal axe-claw, he delivers some overdue and usefully grown-up menace.

He’s a delayed delight, because of the film’s convoluted, supersized plot. Determined to cram in absolutely all of Jake’s long odyssey, the bulging narrative could have done with some nimble Burton’s tailoring. Instead it lingers on Jake’s trauma over Abe’s death in Florida, then shuttles him choppily between his dad in present-day Wales (a bemused Chris O’Dowd) and the Peculiar’s wartime time-loop. Throw in a steady drip of revelations about Abe’s time with the Peculiars, and regular flurries of hair-raising flashbacks to the Wight’s dastardly deeds, and narrative vertigo threatens to set in.

Still, it’s all worth it for the ingenious and wildly imaginative seaside battle finale. It sends in a squad of skeletons (a neat homage to Ray Harryhausen’s bony battlers in Jason and the Argonauts) to take on the Hollowgasts in a flurry of candyfloss carnage and death-dealing fairground rides. Part and parcel of the films sweeter, lighter feel, it proves that Burton can shape shift his talents just as deftly as his Peculiar posse.

Hugely charming if somewhat cluttered, Burton’s horror-spiked YA freaks-and-a-geek fantasy proves a Home run for Asa Butterfield. There’s nothing sleepy about these ‘Hollows’…