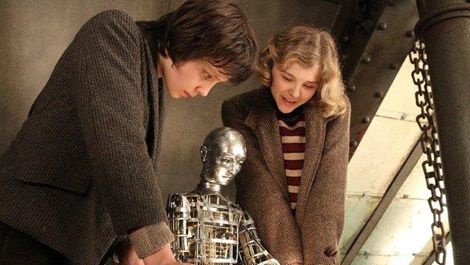 For once, no one gets whacked, stabbed with a pen or beaten to a bloody pulp. For once, it isn’t that kind of ‘family’ movie. In fact, the film most unlike anything Martin Scorsese has ever made is one of the most personal of his career.

Swooping from the sky through tumbling snowflakes, volcanoes of steam and crowds of travellers, Hugo’s exuberant opening shot arrives at a pair of peering wide eyes. Hugo Cabret (Asa Butterfield, The Boy In The Striped Pyjamas ) is a 13-year-old orphan who lives behind the giant clock in a Paris train station in 1931.

We spend almost half the film scampering after Hugo – as Scorsese’s camera whooshes joyfully through a labyrinth of ladders, shafts, cranks and cogs – without ever seeming to get too far, in narrative terms at least.

After about an hour of this – enjoyable though it is - Hugo finally gets where it’s going. And what emerges is something wonderful: an enchanting, funny, heartfelt love-letter to French film pioneer Georges Méliès – and to cinema itself.

We see how Méliès took movies to the moon and back in 1902, how silent cinema’s filmmakers were magicians who can still make us smile and gasp, and how precious things are lost between the grinding gears of technology and time.

There’s something truly perfect and poignant about using cinema’s breakthrough 3D technology to reach back into its past - and Scorsese revels in it. He shows us how the Lumière brothers’ famous Arrival Of A Train At La Ciotat terrified audiences in 1895 by sending a runaway locomotive thundering through the screen in 2011.

From Edwin S Porter to Harold Lloyd, from Cabiria to La Roue, Scorsese (quite literally at one point) riffles through the history book of cinema. He’s Doc Brown, time-travelling, taking us with him.

Still, in a film that hangs off clockwork imagery, Hugo sometimes feels a little… mechanical. A leisurely runtime (124 minutes) and some recycled chase scenes stop it just short of being the truly marvellous children’s adventure craved by Hugo’s bookworm friend (Chloe Grace Moretz).

Almost fittingly, the film’s wordless parts work best. Kingsley’s expertly balanced turn is full of buried pain and pride, much subtler than Cohen’s comic bluster (which can be hit and miss) and Butterfield’s slightly tense, if ultimately touching, performance.

But it’s easy to see why Scorsese has overindulged here. Despite being set in a storybook Paris, Hugo’s story is secretly Marty’s story: growing up watching the world through his window frame, falling in love with movies, restoring the reputation of his hero Michael Powell and becoming the patron saint of lost cinema. Moving images, indeed.