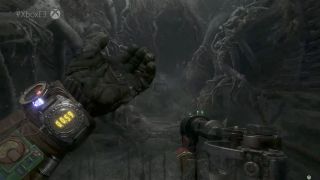 “To live without hope is to cease to live.” The E3 2017 gameplay demo for Metro Exodus, the newly announced next instalment in the Metro series, began rather appropriately with a morbid Dostoevsky quote, and it proceeded to only get decidedly grimmer from there.

4A Games’ follow-up to Metro: Last Light looks set to be a continuation of the horror-focused, FPS adventures of previous titles in the series, with the gameplay seen at today’s Xbox E3 presser featuring crossbows, darkness, and plenty of horrible beasties to shoot at.

With story details light, it’s unclear how Metro Exodus ties into the wider narrative of the franchise, but the thematic and mechanical DNA of Metro was certainly on show, looking even scarier and more captivating while running in native 4K on the Xbox One X.

No specific release date was revealed for Metro Exodus, but a 2018 window – releasing for the Xbox One and Xbox One X (no word yet on other platforms) – popped up at the end to calm our worries about an overextended wait before we can jump back into the nuclear wasteland.

The Metro games are inspired by the novels of the same name by Dmitry Glukhovsky, which take place in former Russia, now savaged by nuclear radiation and a litany of mysterious threats.

Considering how fantastic 4A Games’ titles have been in the past, Metro Exodus will hopefully be able to raise the high standard already set by its predecessors, even if that means getting the living daylights scared out of us once again.