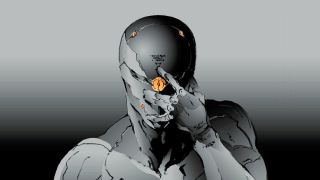 "When we were sitting down to think about the script at a certain point it was like, 'Is Cyborg Ninja in this movie or not?' And the part of me that was a little kid was like, 'There's no world in which I'm ever going to make a Metal Gear movie that Cyborg Ninja is not going to be in.' It's really easy to be like, 'It's a good character to save for the second one,' but no, no, no."

Vogt-Roberts also called himself "a big fan" of Sniper Wolf, so the beautiful-but-deadly sharpshooter may also make an appearance.

Other fan-favorite moments from the PlayStation game may not make it to film, however. Many players to this day remember the shock they felt at being addressed directly by Psycho Mantis as he read the contents of an inserted memory card. But fourth wall shenanigans aren't high on Vogt-Roberts' priorities.

"To me, the fourth wall breaking is a little less important than the walking philosophies and ideologies those characters represent, and getting that right and the tone right and things like that," Vogt-Roberts said. "If breaking the fourth wall makes sense, I'm all for it, [but] I'm more interested in the 'Kojima conversations' about whatever song came out then or whatever - it's that stuff that it just absolutely needs."

And what does Kojima himself think of all this? Well, he's a fan of Kong: Skull Island, at least.

I knew @VogtRoberts was a genius in his indies days but ppl will see it in @kongskullisland. Enjoy Kaiju film of Kong's island,not as reboot pic.twitter.com/H1iRfRPFP3March 6, 2017

I don't know about you, but that's all the endorsement I needed to see Kong this weekend and be hyped for development of the MGS movie to continue.