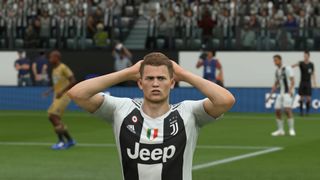 Juventus are set to finalise a £67.5 million deal for the most-coveted young defender in world football, but what does the Matthijs de Ligt FIFA 19 stats breakdown tell us about his chances of keeping the Old Lady on song?

It’s mainly good news – as you’d hope for a player commanding such a fee at just 19 years old, and who spent the past 14 months as Ajax captain. An incredible eight Matthijs de Light FIFA 19 items exist in Ultimate Team. He started the season with a 80-rated standard card, which was upgraded to an 83-OVR card in January. Additionally he earned items for Champions League (84), TOTW (85), MOTM (86), CL TOTT (82), FUT Headliners (92) and TOTS (95).

From that selection de Ligt’s current FIFA 19 base card is the 83-rated gold, so we’ll focus on that here. Its aerial prowess leaps out in every sense: 88 strength, 82 heading accuracy, and 80 jumping. But he’s not easily beaten on the deck either, with formidable defensive scores for standing tackle (84), marking (83) and sliding tackle (78).

Those are sound attributes for those who adopt a conservative, sensible defensive approach, but sweaty pace merchants are likely to require more convincing. de Ligt scores 74 for sprint speed but only 63 for acceleration, for an overall pace attribute of 70.

Going forwards, the Dutchman is tidy if unspectacular. 78 short passing and 75 long passing make him a smart possession player, as befits his history in the Ajax youth system. And he threatens occasionally from range if you can sneak him upfield, a 62 long-shots rating boosted by 80-strong shot power.

Leaping over to everyone’s favourite tracksuit sim, the de Ligt Football Manager 2019 stats match up with those found in EA’s game. Remember, however, that these are out of 20 rather than 100.

FM 2019 grants our boy 16 ratings for tackling and determination, and 15 for heading, passing, bravery and jumping reach. Indeed, all of his mental stats (composure, decisions, and so on) are above 10. Physically he fares even better, notching 14s for agility, stamina, balance, and strength.

However, it’s bad news in the opposition half. 9 long shots, 8 penalty taking, 8 finishing, 8 crossing, 7 long throws, 6 corners: good luck to anyone throwing de Ligt up front in the final ten minutes. If Football Manager is to be believed, this flying Dutchman can barely keep his footing once inside the opposition penalty area. Don’t be surprised if that theory is obliterated within weeks of him donning Juve's legendary black and white.