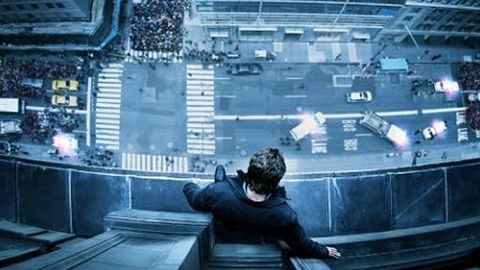 According to Hollywood heist movies, the best way to steal something priceless is while the world watches unaware. Man On A Ledge ’s less-than-stellar USP is to have Sam Worthington threatening to jump off a NYC skyscraper as literally tens of people block the streets below, transfixed.

While this escaped con threatens suicide, his brother (Jamie Bell) and girlfriend (Genesis Rodriguez) enact what might be the dimmest robbery committed to celluloid, involving a skateboard, a Polaroid and an extraordinary capacity to suspend disbelief.

Despite its impressive – if eclectic – cast list, Asger Leth’s follow-up to documentary Ghosts Of Cité Soleil feels second-hand, as if it passed through the in-trays of several better-known actors on its way to the screen.

Think Russell Crowe instead of Worthington in the lead, Charlize Theron rather than Banks as the hostage expert, Edward Norton instead of Edward Burns as her superior. It’s not that any of them are particularly bad (although Worthington’s American accent barely goes the distance), it’s just hard to feign interest when the performers don’t seem to be able to, and some of the dialogue’s so excruciating it’s a wonder screenwriter Pablo F. Fenjves isn’t joining his protagonist on the ledge.

“One day you’re going to stick your dick in the wrong door and someone’s gonna slam it,” one character is warned. While Banks tells Worthington, “If you’re lying about any of this, I’ll push you off myself…” All in a day’s work for the NYC suicide squad.

Credibility teeters on the brink. Would Worthington’s Nick really risk it all to steal a MacGuffin (evil Ed Harris’ favourite diamond) that might not even be there in the first place?

Whether entertainingly terrible thriller or unintentional comedy, Man On A Ledge ’s plan is simple, if stupid: stitch together the unlikeliest bits of Die Hard and The Negotiator and hope no one notices. How’s that for daylight robbery?