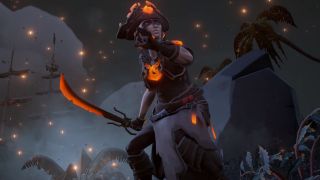 Rare has confirmed that the anticipated Sea of Thieves update, Forsaken Shores, has been pushed back. Instead of September 19, volcanic addition will go live on September 27.

"This decision was not taken lightly, and we know this may disappoint fans who were looking to play the update this week. That said, our priority is to deliver a stable, polished and bug-free experience and we feel that the extra week of development will enable us to do this," confirmed a community update.

"We’d like to thank all our Pioneers for their support in providing valuable feedback and bug reports over the weekend, and for their continued support this week as we roll out fixes for further testing."

That means you'll have to wait a little longer to explore the new Devil's Roar region, which boasts a volcano that will spit rocks and set the surrounding waters boiling, and to play with the new rowboat. Forsaken Shores will also add the cooking skills (roasted banana anyone?) new merchant missions, and a new enemy type, the Skeleton Lords.

Rare warned fans last week that they were having a little trouble with Forsaken shores, with executive producer Joe Neate explaining the delay was a possibility. "Our last couple of updates have seen issues introduced into the build (such as the unfortunate spyglass incident) or have required emergency maintenance immediately following release. With Forsaken Shores it’s our priority to make sure this doesn’t happen again."

While you wait check out our Sea of Thieves Gold Hoarders guide so you'll have plenty of booty for September 27.