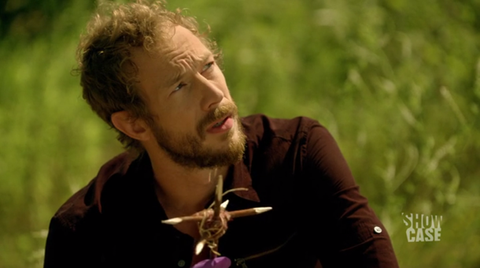 THE ONE WHERE Something's murdering teenagers at a camp for delinquents – time for Bo, Kenzi and Dyson to go undercover. Meanwhile, Tamsin's stirring things up... and Lauren wants a break.

VERDICT Wow, it wasn't until I was looking for a “Best Line” from this week's episode that I realised there wasn't one – nothing hilarious, anyway, which is highly unusual for Lost Girl . And that's because this episode is pure angst from start to finish, from the gruesome way the victims are killed (imagine being awake while a creature stuffs you with leaves and twigs!) to the tearful break-up between Lauren and Bo. It's no coincidence that this episode was written by Lost Girl creator Michelle Lovretta: she knows how to pull those heartstrings!

There is a little bit of humour – Bo asking the teenagers, “Who wants to be my partner?” and all the boys putting their hands up, for example. But overall this is a bittersweet, character-driven episode that really brings home how difficult it must be to date a succubus (Lauren) and how to get over dating a succubus (Dyson). And then, of course, there's Tamsin's predicament: she's being forced to turn Bo over to a mysterious creature who obviously has no good planned for her. It's hard to sympathise, though, because while she struggles at first, Tamsin really does bitch it up in the second half of the story. Curses!

WOLF ABUSE Last week I was a little worried for Kris Holden-Ried after he got slapped by Anna Silk during an emotional scene. This week she slaps him again (just after he tells her she must go undercover as a camp counsellor) and you can really hear her hand connecting with him. Note how he pulls his arm out of her way rather hurriedly afterwards... Perhaps this is a running joke on set: “Who can slap Kris the hardest without him flinching?” That might explain why Kenzi also punches him later. The poor guy must be black and blue.

FAE OF THE DAY A Tikbalang which tortures teenagers. Her human boyfriend gets in on the act, too. Without a doubt, this is the best-named Fae we've met to date.

LOVE TRIANGLE LATEST It's all gone a bit pear for Bo and Lauren, with the latter demanding that she wants a break (by the way, how is it possible to take the phrase “on a break” seriously in a post- Friends world?). You do have to feel for Lauren, who really has been put through the wringer by Bo. After all, she's only human. The fact that she gets drunk with Dyson is a beautiful touch; both of Bo's former lovers drowning their sorrows together in a gesture of solidarity. Creep Of The Week Award, mind you, goes to Tamsin for telling Lauren that she and Bo kissed – with no context whatsoever. Next week Tamsin will change her name to Iago, start wearing a cape and twirl her moustache.

COOL GUEST STAR OF THE WEEK Linda Hamilton plays Tamsin's mentor, Acacia. Early rumour had it that she'd be playing Tamsin's mum, but there doesn't seem to be any evidence that they're related yet. Either way, Hamilton is bloody marvellous in a fairly small cameo and also rocks a fantastic look.

ROUND OF APPLAUSE FOR THE PRODUCTION DESIGNERS, PLEASE The freaky twig-fest awaiting Lauren when she gets home is magnificent. Also, with its Blair Witch connotations – freaking terrifying!

WAS IT JUST ME, OR...? Did anyone else wonder whether it was wise for Tamsin to actually sit on Dyson's bed when she broke into his apartment? He's a wolf and he sleeps under those covers – surely his nose would pick up her scent? Perhaps she just didn't care.

BECAUSE SHE'S KENZI Forced to wear a boring t-shirt while undercover? Throw a corset over it and you're Kenzi!

BEST LINES
Bo [with a heart-breaking chin-wobble]: “This is just a break, right?”