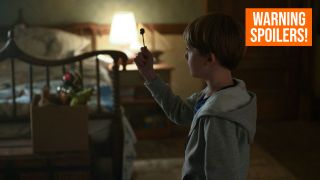 Locke and Key season 1 has landed on Netflix, introducing viewers to the Locke family and the magical world tied to their ancestral home, Keyhouse, Massachusetts.

When Tyler, Kinsey and Bode arrive with their mother Nina to their new abode, whispering keys start to present themselves, and each one offers the user a mind-blowing power. A demonic being, who goes by the name Dodge, is hunting for the keys – especially the Omega Key – and it is up to the children to stop them from succeeding. In the comic books upon which the show is based, there are 18 magical keys, but they are not all revealed in the new series.

So, if you need a hand with getting to know your Anywhere Key from your Head Key, then here’s a rundown of all the keys that appear in Locke and Key season 1, and what magical things they can do. Spoilers ahead.

The Anywhere Key is one of the most important and powerful ones to possess. It gives the user the ability to unlock a door to anywhere in the world as long as they have seen the place they want to head to. This key was hidden in a bracelet given to Kinsey by her father Rendell. Bode is the one who discovers it hiding in the piece of jewellery. He is tricked by Dodge into handing it over which allows the demon to leave the well house as an echo can only leave the confines of the well house with the Anywhere Key.

Read more: 6 major differences between the Locke and Key comics and the Netflix series

The Mirror Key opens a portal through any mirrored object when it is inserted into the keyhole. The user’s reflection has a persuasive power of inviting them into the world and once inside they are locked in there and unable to get out. Nina learns this the hard when we she goes in and it takes Tyler going after her, with a rope tied around his wife, to pull her out.

The Echo Key unlocks the gates to the well house on the Keyhouse grounds and has the power to bring back the spirit of the dead to the real world. Years after his death, Ellie Whedon, while holding the key, brings back the spirit of her high school boyfriend Lucas Caravaggio, but he can only exist within the well house. If an echo tries to leave through the door they will be returned to whence they came. Of course, we learn that an echo can leave if they are in possession of the Anywhere Key.

This key seems to be an amalgamation of the Gender Key and the Skin Key from the comic books. When inserted under the chin of a person, the holder can change their features into any human they can imagine. The demonic echo of Lucas uses it to change into a female version of himself (Dodge/”Well Lady”) and later in the season uses the key to make Ellie look like that woman, too. Lucas is also able to change into another person and we learn that he has been masquerading as new kid Gabe the whole time.

This is a new key that didn’t appear in the comic books and it allows the carrier to create fire. They can do this striking it against an object, like a flame, but can also make a being combust by stabbing it into them. Mark, one of Rendell’s school friends, commits suicide in the first episode by stabbing himself in the heart with the key and later Bode uses it to disintegrate a shadow demon.

The Ghost Key allows the user to separate their spirit from their body and fly around the grounds of Keyhouse. Bode finds it and uses it by inserting it into a certain door that turns you into a ghost when you walk through it. Your dead body is left behind and your ghost can only return it by going back through the same door. Sam Lesser learns that the hard way. As a ghost, you are able to interact with the spirits that remain on the property too, as we see Bode speaking to one of his dead relatives in the family cemetery on the grounds. In season two, we’ll probably see how ghosts can also inhabit bodies that are not their own.

The Head Key opens up the mind of the person to be explored. This happens by inserting it into the back of a person’s neck which renders them paralysed while a second version of themselves is free to roam around. In the comic books, the top of the person’s head is removed to reveal a menagerie of memories as well as the personification of a person’s emotions. In the series, the mind becomes a physical building to explore. For example, Kinsey’s is a shopping mall and her memories are candy in a candy shop.

Things can be taken out and put in. Tyler puts a textbook into his mind to learn more about England to impress Jackie while Kinsey removes her fear monster. Memories can also be added and removed as we learn that Duncan’s childhood memories of certain events were taken out and hidden in the grounds of Keyhouse.

Another new addition, the Tree Key allows the user to hide things in the ground when it is inserted into the right tree. This is how Rendell and his friends hide Duncan’s memories, which are discovered by Tyler and Kinsey years later.

The Shadow Key harnesses the power over shadow creatures when inserted into the corresponding silver crown and worn by the user. In the comic book, these creatures take specific forms, but in the show they are monster-like beings and an individual’s shadow can also be controlled. These shadows can move and destroy material objects but if enough light is shone in their direction they vanish. They can also be destroyed when stabbed with the Matchstick Key.

This key, like the Shadow Key, only works when used with the corresponding object. In this case, a cabinet which has the ability to fix broken things when they are placed and locked inside. Nina is the one who discovers the powers, while drunk, and is able to fix her broken mug, Kinsey’s Orca and a book she rips up. It cannot, however, bring people back from the dead as Nina learns by putting Rendell’s ashes inside.

This key gives the user control of a person when inserted into a magical music box. The user has to say the person’s name they want to control and give it instructions. Kinsey does this with school bully Eden who she forces to fall over, make out with a statue and pour soda all over herself. It differs from the comic books, where the instructions are delivered through song.

This is the most dangerous key of all as it unlocks a portal to a demonic world. This door is located in the sea caves below the Locke estate, though the Netflix show doesn’t reveal its historical origins. Only the Omega key can unlock the door and Dodge has been looking for it throughout the season. Rendell had hidden it in his mind when he was a teenager but it was later discovered by Tyler in his father’s ashes.

The door protects this world from the demonic entities trying to escape and latch on to humans in order to survive and Lucas was a victim to this. These demons need a host or when they pass through they just become a hard-like substance and it’s likely we’ll learn in season two just what this substance can be used for.

Want more on Locke and Key? We went on set to go behind the scenes Netflix's attempt to bring the acclaimed comic book to life on screen.