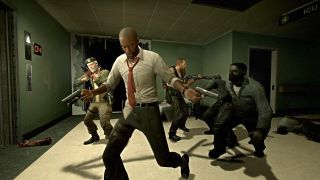 On the heels of another crop of purported leaks, Valve confirmed in a statement to IGN that Left 4 Dead 3 is not in development.

"We’ve seen rumors to this effect for the last couple of months," Valve said. "We did briefly explore some Left 4 Dead next opportunities a few years ago. But we are absolutely not working on anything L4D related now, and haven’t for years. It’s clear some people are having fun creating misinformation to spin up the community and other outlets. Unfortunately, for now a new L4D game is not something we’re working on."

Valve's dismissal comes just moments after a confusing report from HTC China president Alvin Wang Graylin, who listed "LFD3" as a sister VR project to Half-Life: Alyx in a recent presentation. Graylin's claim was spurious, and now we know it was mere speculation.

A new batch of concept art allegedly taken from an old version of Left 4 Dead 3 may have given us a glimpse into Valve's initial vision for the hotly anticipated sequel. That said, it's worth taking the leak with a fair bit of salt.

The images were shared by Valve News Network, a YouTube channel which specialises in leaks like this. As VNN's video explains, this concept art was purportedly drawn by Valve monster man Ted Backman in 2012, around the time that VNN claims Left 4 Dead 3 development really started moving. VNN says it received the art a few months ago, but readily acknowledges that it is not indicative of what the next Left 4 Dead game may look like, if Valve elects to make one at all.

On that note, VNN claims to have heard that "there were a few major meetings that took place almost immediately after the trailer for Half-Life: Alyx dropped that essentially caused everybody internally at Valve to change everything about their future plans for virtual reality, public communication, and game development in general." Last December, the channel's owner, Tyler McVicker, tweeted that a Left 4 Dead VR game is also in the works. But again, it's clear that the latest batch of concept art is totally unrelated.

This isn't the first time a new Left 4 Dead game has been rumored, and it won't be the last. Both Left 4 Dead 3 and Left 4 Dead VR remain unconfirmed and largely unfounded, but given the pre-order success of Half-Life: Alyx, which led Valve's VR headset to sell out in almost every region, it's not unthinkable that the studio would try to recapture that lightning with another long-awaited sequel repackaged as a VR game.

As it happens, a batch of alleged Half-Life: Alyx art was also leaked this week.