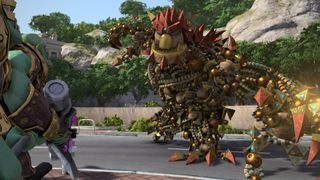 If you're here reading this, you're probably after some help to get through Knack, and we're not about to judge you. It's actually a lot more difficult than many would expect, and plays with an old-school charm that evokes the likes of Jak & Daxter and Crash Bandicoot.

But don't fret! Don't freak out! Don't throw your DualShock 4 across the room! I've played through the game, and have some tips and tricks that should help you get the most out of your Knack experience. Starting with...

Seriously, all of them. Every single one. Don't let a single one slip through the cracks. Energy you've gained carries over even if you die, meaning that you'll be able to bank some once you're smashed to bits. Even if the Sunstone is small, you might as well grab that energy - there's no harm, and there's a good chance you're going to need it soon.

Stuck on a battle? Keep dying to the same few enemies? Screw it - just use your special attacks on them. It's tempting to try and hold on to all of your energy for a boss battle, but honestly, you might as well just use it whenever you need to. I treated it like a "screw this battle" button, and found that I cruised through the game quicker when I was more liberal with my power attacks.

Learn to dodge, but know the limits

The right analog stick doesn't move the camera in Knack (which is a shame, because sometimes you'll wish you had more control). Instead, it causes the hero to dash in the direction you press it. Learn to use this well, because it's one of the most important things you'll do when you play. Dodging can be the difference between completing a level and a trip back to the checkpoint. That said, you're not invulnerable when dodging, so don't expect it to save you every time.

Punch any wall that looks even a little suspicious

There are gadget parts and crystals hidden all over Knack, and you're going to want to collect them to unlock new powers and abilities. Thing is, they're extremely easy to miss. After beating the game I'd only completed two gadgets, and that was with a lot of searching. Though some are easy enough to spot (oh, a giant crack in an ice wall? What could it be?) others are relatively well-hidden. So unless you're in a rush, go ahead and punch every single wall you come by. It might take time, but you'll be thanking me when you unlock the ability to slow down time.

Abuse the hell out of the spin dash

Jump in the air, hit the attack button, spin towards the enemy, succeed. That's pretty much how to beat any encounter in Knack, no matter what you're up against. The lower you are to the ground, the more likely you are to be defeated, so you might as well hop around like a bunny while trying to defeat the goblins and robots.

Practice makes perfect, so stick with it and hopefully these tips will help you smash your way through the story and defeat the Goblins. If you have any tips of your own, or need any specific help, let us know in the comments below!