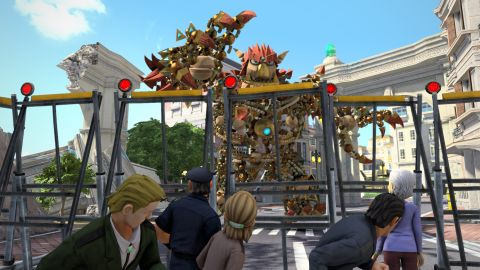 Throughout this review I have to use "Knack" to describe both the name of the PlayStation 4 launch title and its titular hero. Normally, these sorts of situations can make things confusing (it's like trying to talk about the Pokémon in Pokémon--what a headache), but I don't think it's going to be a problem this time around. Thing is... they're sort of one and the same. Knack's larger (and more hardcore) than you'd think, it doesn't have a heart, and the pieces it's made up of aren't really all that impressive. See? I'm talking about both. I think we're going to make it through this without a problem.

The lack of heart becomes obvious about 10 minutes into the game. After completing an obstacle course, Knack struts--with a painful amount of swagger--towards a group of impressed onlookers. "You call it… Knack?" an unmemorable woman woman asks an unmemorable doctor. "No, I call myself Knack," the robot responds in a gruff, sassy, ill-fitting voice. Throughout the game he continues to grumble atrocious one-liners, channeling Duke Nukem by way of the Disney Channel. Seriously, he says "I've got the chills!" after being covered by icicles--that's not clever, it's cringe-worthy. Every word he says strips another layer of likability away from him.

The frequent cutscenes and non-stop banter make it clear that the world and characters were meant to be put in the spotlight, but the execution is flawed. Human characters simply bellow their uninteresting lines in order to provide exposition for an adventure that never really makes sense. Dialog sounds ripped from a direct-to-DVD movie, interesting concepts are approached and then abandoned, and plot holes are acknowledged but never explained. Worse yet, the evil characters are the type that cackle and vaguely discuss their schemes, but when asked about their motives they evade the question as though being relatable would somehow get them kicked out of the moustache-twirling villain club.

Which is a shame, because there are other elements of the game that work surprisingly well. Knack's art style is beautiful, with bright, vibrant colors that fly in the face of complaints about gaming's subdued palette. Enemies are well designed and extremely varied, with great silhouettes that make it easy to scan the battlefield to come up with a tactical approach. That's important, too, because Knack's combat is surprising and deeper than it looks.

Hidden throughout the game are walls that can be destroyed in order to find collectible gems (that can eventually be used to unlock different forms of Knack) and gadgets (which can be crafted into upgrades). They're fun in theory, but even after searching as much as possible I was only able to find a handful of gems and enough gadget parts to unlock two gadgets. It's randomized which ones you get in order to incentivize replaying the game, but it'd definitely have helped the repetitious combat if the game-changing gadgets were doled out more liberally.

When you stumble upon a fresh bunch of enemies after battling two other groups, platforming over shaky rocks, and bashing a bunch of Sunstones to power up your special meter, you seriously need to analyze the situation. Say there are two archers and a big, beefy swordsman. You'll want to save the big guy for last because he's the hardiest, and you need to take down the goblins with bows unless you want to spend the fight dodging arrows.

So you dash towards the archers and clobber them both in one hit (after being tagged by an arrow that chunked half your health) before turning to deal with the other, but as you start to attack he bashes your body into a hundred pieces with a big, mean sword. You're dead, sure, but you've learned something. You know that you need to dodge that arrow, and you know that you need to avoid that big sword, and with that knowledge you'll have a better chance at besting that encounter… after battling two other groups, platforming over shaky rocks, and bashing a bunch of Sunstones to power up your special meter. Again.

So, yes, there are problems with checkpoints. Sometimes they're set before hard battles, but in other instances you need to repeat a lengthy series of uninteresting encounters before getting back to the point where you failed.

There's a failsafe in place--the special meter doesn't go down when you die, meaning it'll continue to fill even if you're failing to proceed, giving you enough power after a few failed runs to use the level-clearing attacks it enables. It works to get you out of a bind, but it became more of a crutch than anything else. After a while I'd use one of Knack's big, fancy abilities whenever it even looked like I'd get stuck as a sort of "I'm done with this shit" button, just so I wouldn't have to repeat the previous three minutes of wandering. I'm all for the difficulty level being higher than expected, and the smart combat is definitely appreciated, but repeating boring segments isn't even remotely engaging as a punishment or otherwise.

Most of the problems fade away temporarily when the game takes advantage of Knack's ability to grow in size. Knack (as a character and a game) is a technical marvel. Below his yappy head is a group of floating artifacts that cast individual shadows as he moves through the world, and as he becomes more visually impressive as he grows. It's here, in these moments, when Knack is at its best.

The feeling of power you get from standing tall above enemies that--mere minutes ago--were frightening and daunting is intense. When he's at his largest, towering above buildings and kicking tanks aside, the power of the PlayStation 4 is evident--albeit for fleeting moments. The next-gen tech does a great job of showing off the particle effects, but it's a huge let down when they vanish from the screen, taking an otherwise next-gen experience and grounding it in the past. Crates fade from view mere seconds after they break, and enemies disappear only just after they've hit the ground. That problem was more or less addressed last-gen, and it's shocking to see it happening next-gen.

There are certain times, when the camera is pulled in tight, that Knack looks like the next-gen showpiece you want it to be. In-engine cutscenes show off the detailed world and fantastic lighting, with wonderful shadows and imaginative characters. And there are moments where the gameplay lives up to expectations, feeling like a modern game with flashes of old-school nostalgia. Problem is, those times are interspersed between design flaws that feel two generations old, making for an uneven, unmemorable experience.