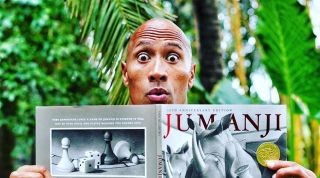 Are you excited for the new Jumanji? You should be. Even if you've only heard of it in passing and have been all "eh, maybe I'll check it out" this video ought to change your mind.

First off, Dwayne Johnson (aka the world's biggest movie star) is headlining the cast as a guy called Doctor Smolder Bravestone. Seriously. But if anyone can pull off a name that bananas it's The Rock. His boundless energy for life is proper infectious and it's hard to not get caught up in that enthusiasm. I now point you towards exhibit A, his latest video posted to Facebook:

Whatta joker! Alright, so yeah, not the most advanced humour, but it's a lot of fun to see a movie star who seems truly excited with his good fortune.

The short-but-sweet video is the second piece of social media Johnson's teased us with this week, after he delivered that first look at the full cast a few days back. While that gained some negative attention (Karen Gillan really doesn't have to be that scantily clad, does she?) apparently it's a key part of the film, and it'll all be explained. Perhaps she's a kid who gets blown up to adult size? Hey, this is the world of Jumanji.