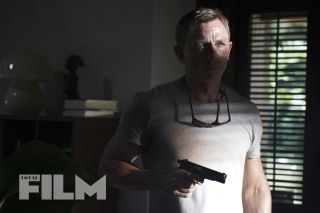 Daniel Craig’s tenure as James Bond might be coming to end, but he’s still got one last film in him. And if the No Time to Die trailer is anything to go by, he’s set to go out with a hell of a bang.

“[Daniel’s] been the most extraordinary Bond,” producer Barbara Broccoli tells our sister publication Total Film magazine in their new 2020 Preview issue, which includes the exclusive new image of Craig’s Bond, above. “When you trace the evolution of the Bond character from Casino Royale to now, it feels very epic. This film feels like a culmination.”

Franchise newcomers in No Time to Die include Lashana Lynch’s Nomi, Ana de Armas' Paloma and, of course, Rami Malek’s mysterious villain, Safin. Is there somebody worse than Blofeld?” teases producer Michael G. Wilson of 007’s new adversary. “Well, maybe there is, out there...”

Ultimately, though, No Time to Die’s most crucial mission is giving Craig’s Bond the send-off he deserves. “We always set out to make the best Bond film ever,” says Broccoli. “Our feeling is that we’ve achieved that on this one.”

For more on No Time to Die, check out the 2020 Preview issue of Total Film magazine, which hits shelves on December 20. Also included with the issue is a huge Review of the Year 2019, rounding up the best films and must see moments of the past 12 months.