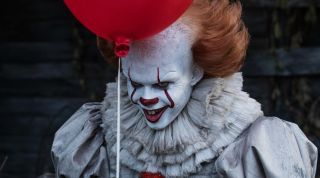 We’ve all stumbled our way through an interview (or twelve). Actors, though are a special breed. Auditions can make or break a career, which is why Bill Skarsgard probably saw the need to drive through Los Angeles in full clown makeup to audition for Pennywise in the It movie… and that’s not even the strangest part.

Skarsgard’s day, which culminated with an It callback from director Andy Muschietti started out pretty normally. If you can call it that. Speaking to Entertainment Weekly, Skarsgard explains what he had to do pre-audition: “For the callback, director Andy Muschietti asked for people to wear simple whiteface. Not a clown nose, but a red-painted nose and a clown smile. I thought this was a great idea – up until the point where I realize I don’t know how to put on makeup. That’s a skill I don’t have.”

When in doubt, however, ask your girlfriend to apply the clown makeup. We’ve all been there. “I ended up asking my girlfriend to put some makeup on that morning,” Skarsgard says. “And then I get into the car and had to drive across L.A. in this clown makeup. There was something kind of humiliated and absurd about the whole thing.”

It somehow gets weirder. “Andy had also asked to explore clown laughter, so I’m sitting in the car and I feel ridiculous, but I thought I might as well absorb it and use it. So, I just started to laugh like crazy in the car, as I’m just bearing down on pedestrians.”

If trying to give half the population of Los Angeles a heart attack, then job done. Remarkably, it didn’t even end there for the Swede. He still had to walk to the audition: “The audition was not on a studio lot, so I had to park and walk for a few blocks with my clownface on. I pretty much just stayed in character through the whole thing. It was one of the most bizarre things I’ve ever done. It sums up my approach to this character.”

Fair play to the Pennywise actor for turning something absolutely awkward and humiliating into something that (arguably) helped him perfect the role of the demonic clown. I would’ve called in sick.

For more Pennywise posers, check out the 6 questions the It movie Chapter 2 has to answer.