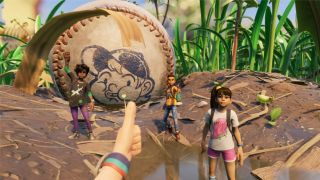 Obsidian is gearing up to launch Grounded, its first game under the Xbox Game Studios banner, and the company is teasing a limited beta coming soon for Xbox Insiders. In a footnote to its blog post detailing the game’s presence at this weekend’s PAX East in Boston, the studio hinted that Xbox Insiders should be mindful of the program’s offerings “very soon.”

“In the coming weeks we’ll have more updates to share with you as well as some exciting news we’re looking forward to getting into next month. For now we’ll let you know that if you want to get an early peek at the world the team here at Obsidian is making with Grounded then you should absolutely look into the Xbox Insider program very soon. Just sayin’.”

If you’re not already an Xbox Insider, it’s not too late to sign up at the link above. It sounds like the game will be available to Insiders in a preview state, which makes sense given how often Xbox Insiders get access to stuff like this. While you’re browsing the Xbox Insider app, you can also sign up to receive early builds of upcoming Xbox console updates, take polls, and provide feedback on changes to the ecosystem. Microsoft seems to consider Insider feedback pretty closely, so it’s a good way to have your voice heard while also getting to play games early.

This is the first time we’ve heard about Grounded since it was revealed late last year. If you missed the reveal of Obsidian’s quirky survival game, check out our hands-on coverage here.

Another perk of being an Xbox Insider? You can participate in Xbox Console Streaming.