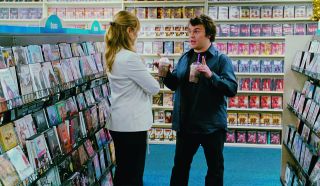 As a kid, I adored going to the pictures to gawp in awe at the big screen. But it was in my local video store that my love of cinema was truly cemented.

Ask any film fan aged roughly 30-plus about this and their eyes will twinkle, a wistful smile upon their lips. “Ah yes,” they’ll breathily reminisce, rose-tinted memories skipping across their mind. To walk into that hallowed space, to browse those happy aisles, where row-upon-row of sweet rectangular boxes would promise mysterious untold delights.

For those of us who grew up in the ’80s and ’90s, this was the place where we cut our film-geek teeth. Sure, we read magazines and watched late-night shows such as Moviedrome, but in the rental store, there was a genuine sense of discovery. With so many films to choose from, many of which you’d never heard of, you would often – to invert that old adage – judge them based almost purely on their covers.

It was at my local video store that my life-long love of horror began. I’d gaze at the scary-movie section, simultaneously fascinated and appalled by the cover of Brian Yuzna’s Society, with its promise of face-peeling grue. Or dare myself to examine the art for A Nightmare on Elm Street 5: The Dream Child, knowing that my parents would never let me rent it until I was older.

The 25 best movies on Netflix you can stream right now

It wasn’t just macabre treats though. My family used to head to the store en masse, taking turns to choose our viewing. I remember my mum selecting a dull-looking flick called The Shawshank Redemption, only for it to promptly change my life forever.

Things reached their pinnacle for me when I got a part-time job in a video store in the early noughties. With seven free rentals a week, I gorged on Bergman, Lynch and a new director called Christopher Nolan. It’s still one of the best jobs I’ve ever had.

Nowadays we have streaming services and postal rents, and I’m all for that. I can binge the latest Netflix series on my phone, or get a silent-era German classic far more easily than I ever could before.

Such unparalleled access to cinema can only be a good thing. And yet. And yet... part of me still longs for the humble video store. Or is it just me?