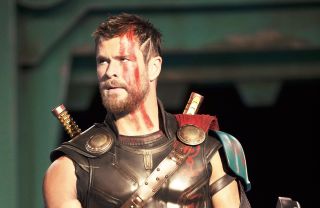 Humanity seems like an odd thing to demand from a movie about an Asgardian god and a giant green monster, doesn’t it? But it’s the thing that’s been in short supply in every Marvel movie since Captain America: The Winter Soldier. It’s also exactly why Taika Waititi is such a wonderful, surprising choice to direct of Thor: Ragnarok. And with the first teaser trailer making everyone sit up and take note, I'm here to tell you how he's going to do it.

If you’ve read this far, you care enough about Thor: Ragnarok to watch Taika Waititi’s most recent film, Hunt for the Wilderpeople. Or, if you don’t care about Thor: Ragnarok and you clicked on the wrong link, then a) thank you for sticking with me, it must have been confusing; and b) you should still watch Hunt for the Wilderpeople. Really. It’s that good. Instead of being a superheroic romp on the dark side of the cosmos, Hunt for the Wilderpeople is about a delinquent youth and a grumpy bushman forced to go on an adventure together; a glib logline that only hints at the moments when the movie soars. It’s a warm, surprising, humane story, about two disparate people forced to face opposition together - sound familiar? - but it’s the pacing that makes the difference. You’re hooked on the characters in the first 10 minutes. It wastes no time in emotionally engaging you, but you never feel manipulated. It’s predictable in a way that keeps you watching, hanging on the hope of a satisfying climax. That’s exactly what I want from a superhero movie.

We know that by the end of Thor: Ragnarok, Bruce Banner and Thor will be standing atop some smouldering ruin, evil defeated, having grown as people while manifestly staying the same. There will be fights, lights and broken bodies, but I’d argue it’s conceptually similar to Hunt for the Wilderpeople. There are loads of bits in Wilderpeople that represent this perfectly - I promise not to ruin them here - and they demonstrate Waititi’s trust in the audience and his confidence as a storyteller. There’s every suggestion we'll see something similar in Thor: Ragnarok. The cast has all the experience and ability. Hemsworth demonstrated impeccable comic timing in Ghostbusters and the Team Thor mockumentary. His breezy, boorish Thor is the ideal foil to Mark Ruffalo's perfectly crumpled Bruce Banner. We know that Thor and Hulk have an epic, gladiatorial battle in Ragnarok, but that’s the MCU equivalent of a third-act breakup in a romcom. Everybody fights in a Marvel movie. Instead, I’m more interested in the quiet moments that got them there and what happens after they make up. A Thor/Hulk road movie would be a better demonstration of Waititi's skills.

But do we need humanity? Marvel movies are just about uppercuts, right? I’m not saying Thor: Ragnarok should ditch fights in favour of backside-patting tales of true love and low adventure, just that action is the one thing we don’t need to worry about. You know those bits will be satisfying. You wouldn’t hire Michael Bay to make a Marvel movie - or, ideally, anything more cerebral than a Victoria’s Secret commercial - because he has nothing to add. There’s only so many ways Hulk can punch a car, and we’ve already seen most of them. At their best, the Marvel movies are stories about people (albeit people who can alter reality or tell lighting what to do). The greatest MCU moments aren’t about how many buildings get levelled, but who throws the punches that level them. Taika Waititi can give us that, and much more.

I realise there’s an argument to be made that Marvel movies don’t need changing. We’re now in phase three of the MCU, and the public’s desire for capes and Kevlar shows no sign of abating. But we’re in danger of Marvel movies becoming ordinary. If the wheezing Age of Ultron taught us anything, it’s not that the superhero movies are in decline, but that thunderous action sequences aren’t enough to keep us enthralled. This isn’t TV. Three years is too long to hungrily wait for the next episode. Even when they’re part of a larger story, movies have to be tight, self-contained, satisfying. Directors can’t assume we still care about the characters. For me, the most nourishing moment in Age of Ultron was the pause for breath before the finale, which reminded us that Hawkeye is a human being with a family. Context is everything.

That’s why Taika Waititi is exactly what the MCU needs right now. He’ll find the emotional heart in the flagging Thor trilogy. A feckless, popcorn finale is the last thing we need. Thor: Ragnarok can still do all the big moments while showing us a different side to characters we thought we knew. As anyone who’s seen Hunt for the Wilderpeople will tell you, it’s going to be majestical.