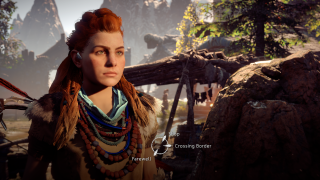 So here's the bad news: You'll need a 4K screen to get the most out of this new Horizon: Zero Dawn trailer. It's meant to show off how good the game looks running on the newly-announced PS4 Pro, which supports the increased resolution. The good news is, it's uber-pretty regardless, and gives us a fresh look at one of 2017's most-anticipated games.

I don't know about you, but I've been waiting to see how Aloy would handle one of those giant, giraffe-like robots with the disc-shaped heads for awhile, and watching her go all Shadow of the Colossus on one was super satisfying.

As for whether or not the improvement from 1080p to 4K is worth getting excited over, I couldn't tell you - I don't have a 4K display. But if you do, let us know just how much prettier the 4K version of this trailer is. Like, on a scale from "meh" to "whoa," where does it fall?