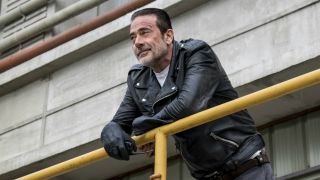 Speaking to EW, (now-former) showrunner Scott Gimple reveals exactly what was left on the cutting room floor: “There was some really cool stuff with Negan at the Sanctuary sort of addressing the troops and seeing some of his own conflicts about what they’re facing.”

Negan not playing his hand when it comes to his own internal conflicts might just crop up again next season. Negan is under Rick’s care now (if you can call it that) and there’s bound to be plenty of moments for some one-on-one facetime where Negan can reveal a bit more of his potentially sympathetic characteristics.

Not only did we miss out on a final smarmy Negan speech, but we also didn’t see a crucial scene that would’ve shed a lot of light on one of the finale’s biggest shocks. “There was a lovely exchange between Rick, Michonne, and Maggie that was about the future,” Gimple says.

While the Negan stuff may have been superfluous, the optimistic-sounding scene with Rick, Michonne, and Maggie may just have been cut for plot reasons other than anything else. If Maggie is indeed plotting against Rick, having them be all lovey-dovey just minutes before that reveal would’ve made Maggie’s 180 absolutely nonsensical (as if it wasn’t already!).

It seems, then, that Maggie is all the way in when it comes to facing off against Rick – and it’s her future, not Rick or Michonne’s that she’s fighting for.

If you’re worried you’re going to miss out on it, then hold your horses. Gimple confirms he’d love “to show some of those scenes on… a DVD,” so keep your eyes peeled for the season 8 home release further down the line.

Even without those cut scenes there's still so much to talk about, so check out 8 questions we had after watching The Walking Dead season 8.