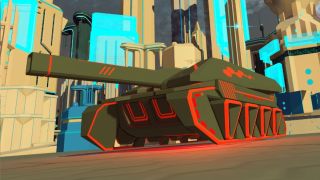 Tanks work well in VR. You have a big comfy seat to sit in, a nice window and a bloody great gun to make problems go away. Battlezone takes all of that and wraps it up in a procedural roguelike shooter where you have to battle other tanks, blow stuff up, hack things, protect other things and, thanks to the visual style, feel a lot like your fighting in a Tron war.

In practice that means gliding through futuristic cities in search of anything red to to blow up. There are other tanks, turrets, aircraft and so on, and while the shooting’s simple but streamlined - just point and shoot - the VR aspects are what really brings it to life. Being able to look around the cockpit in search of targets and objectives never seems to get old. It’s a solid, stylised world but a very tactile and believable one.

In fact just looking around the cockpit is brilliant. It’s full of screens you can pop out and read to get info on objectives, upgrades and missions. It's possible to lose a fair bit of time just browsing options and flicking through consoles. It’s maybe not the prettiest cockpit in a VR game but it is the most practical, as you pull up monitors and check everything out.

Part of that checking involves looking over the game’s procedurally generated map that has you navigating a randomised ... uh, battle zone to reach a final objective marker way over on the other side. Progression is all about improving your gear, and unlocking new stuff is a big part of the game here as you fight through increasingly challenging areas. Weapons-wise you start with a basic unguided shell, a homing missile and an area of effect thing called Rot that slowly damages enemies caught in its cloud. Where you go with all that depends on you.

Objectives, like the maps, vary. I tried stuff like clearing out all the enemies, hacking objectives, protecting bases and so on, with other sub-objectives (things like controlling radars to reveal all enemy locations) adding a little width to it all. Although that said it’s still a very arcadey experience. This is more about colour, speed and fun than grit and depth.

One area where that fun gets more of a boost is the four player co-op. If only for the fact you can wave your guns at each other…

Admit it: you're totally doing that.

Even though it’s basically just an online shooter there’s something about being able to look physically around and see a friend inhabiting the same space. There aren’t many online co-op experiences around at the moment so this is a good way to share virtual reality with friends. And everyone likes blowing stuff up. Just gliding through the city four abreast is oddly exhilarating as you sneak furtive sideway glances to see your mates out there.

Of course, the real test will come over extended play. In short bursts the action’s immediately rewarding and a great way to show off VR to friends. However it’ll be the longer sessions, and seeing how the procedural maps and player progression build on this, that’ll be the making of Battlezone.

Battlezone will be out on PS VR on October 13.