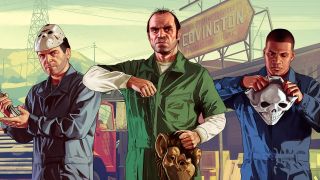 It'll also include GTA Online and the most recent Diamond Casino Heist DLC for The Diamond Resort and Casino. The huge announcement was made on Twitter, with the official Xbox Game Pass account sending out this hilarious tweet:

Have you seen the news lately? pic.twitter.com/fYxxQI06tDJanuary 3, 2020

In the official statement, Xbox Game Pass community manager Megan Spurr writes, "You know us at Xbox Game Pass, we like to make memes and jokes about our games. I am sitting here giggling to myself about something Trevor Phillips said in GTA 5, and then realized that there is no possible way I could repeat that out loud without getting in trouble. I am productivity personified, and here to tell you that GTA 5 is available today with Xbox Game Pass for Console."

Xbox Game Pass members will enjoy 10% off the Criminal Enterprise Starter Pack or Shark Cash Cards or get 20% off the base game in the Microsoft Store. The game will also drop with the latest December 12 update, The Diamond Casino Heist, which casts you as the mastermind behind an Ocean's Eleven style heist. The update also brought the brand new iFruit Radio Station and straight up bops - the channel is hosted by Skepta and Danny Brown and features beats from Megan Thee Stallion, DaBaby and City Girls (check out our piece on iFruit Radio Station here). If this ain't a way to start off the new year, I don't know what is.

It's amazing to see the legs GTA 5 has had - it dropped over six years ago and is still churning out new online content with rich storylines. Impressive stuff. If you're interested in exploring a life of crime, you can still get your first three months of Xbox Game Pass for just $1.

If you're gonna play it, you'll need to keep up on the weekly updates - that's what our GTA online patch notes are for.