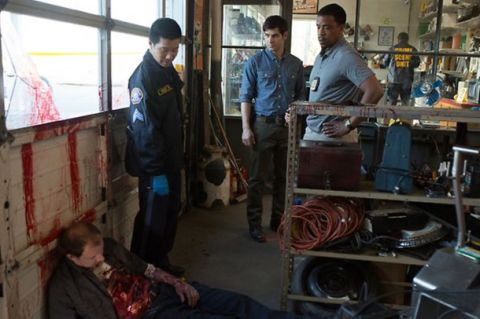 THE ONE WHERE Monroe stands in for Rosalee at the shop with disastrous results when his potion making goes awry, while Nick and Hank unravel a case where a father and daughter on the run aren't what they seem and Juliette goes to the precinct to jog her memory and remembers her Prince Charming... Except it's still not Nick.

VERDICT Well I've spent weeks longing for Juliette's amnesia to lift, and finally this week we saw it happening. She remembered Nick, the fact he was a Grimm, everything. But don't rejoice, because in the most cruel writing ever, it was all a chuffing dream.

In a return to frustrating form the momentum of the first few episodes has slowed, and now the worry is that the after-effects of the spell on Juliette (and Renard which made for an interesting dynamic, the most interesting aspect of this whole amnesia storyline so far) will drag on for a few more weeks yet, bringing a whole new dimension to the phrase “milking it”. That said, if that means a little more screen time for Sasha Roiz then let's not quibble – especially with Adalind back on the scene to make things interesting.

The case of the Drang-zorn dad and his daughter duo on the run might not have had the most surprising twist, but that shot of April sitting on the swing dripping blood having gnawed so fulsomely on her foster dad's arm was genuinely disturbing in the way that only a genre creepy child can be (see also Pierce Gagnon as Cid in Looper ).

The Monroe subplot definitely suffered from the lack of Rosalee (brought about by Bree Turner's maternity leave), but more so from the writers seemingly forgetting that Monroe watched his ex-girlfriend die to protect him last week. No reaction at all? He's back to comic relief? It's these differences in tone and lack of consequences week-to-week that can make Grimm such frustrating viewing at times. That said, the moment when Nick referenced Monroe saving Hank from Stark in season one was a nice nod back to cases past, and shows the writers can do it if they try. I guess the proof of the pudding will be whether Hank's new-found knowledge affects his relationship with Monroe, or if he even remembers it next week. On past form it may never be mentioned again.

BEST BIT Adalind is back, and she's really rather upset what with her mum being dead and all. That doesn't mean she doesn't have time for a flirtation-heavy phone conversation with Captain Renard though.

BEST LINE
The consistently funny Sergeant Wu : “I miss the good old times when people just shot, stabbed or strangled each other.” Little does he know...