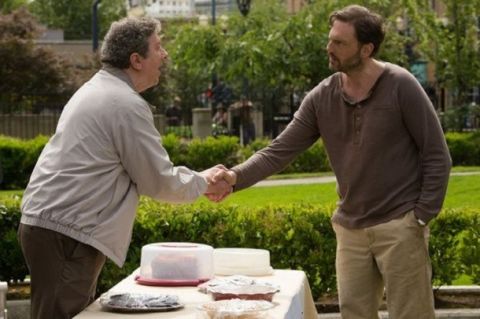 THE ONE WHERE Grimm switches to Aesop's Fables - tackling the wolf in sheep's clothing with a case of a church of sheep-people being financially fleeced by their Blutbad vicar. Meanwhile, Nick is targetted once more by an anti-Grimm associate of the royal family.

VERDICT Even on Grimm's basis of being a bit daft at points, this is one of the weaker and more predictable case-of-the-week episodes for a while, which is disappointing when the show had been building such momentum before its hiatus. The premise of the episode is potentially interesting, and anything involving Monroe going undercover is always going to be fun (although no mention of Rosalee this week at all? After the end of the previous episode? If I didn't know better I'd say this was a filler episode moved around in the running order), the ending of the two wronged women was too cheesy even for my (pretty cheese-tastic) tastes.

The Juliette/Nick amnesia arc is now so dull that I secretly hope she never remembers, and instead moves away to live happily ever after elsewhere. The random chats between the former couple are so staid and boring that you have to seriously wonder how Nick ever wooed her in the first place, made worse by the fact he just continually goes on about what a great couple they were – something that as an audience we've never really seen. Hopefully Renard's flashback to awaking our sleeping beauty is the start of a magical love triangle type thing; anything to make this a bit more interesting (and move it along!). Renard's pleasure that Nick despatched another royal assassin was interesting though; when these plot strands start moving again I'm hopeful for some interesting allegiance shifts.

While “The Good Shepherd” has some entertaining moments (and the herd mentality was brutal even if, as ever, Grimm 's FX ambitions are limited by budget) it wasn't a strong enough story to stand alone with so little inclusion of the ongoing plot threads. If it had been slipped between two solid episodes then it probably wouldn't have felt so weak, but as the return from a break it is disappointing. Even Silas Weir Mitchell in a brilliantly silly hat couldn't raise this to any more than average episode of Grimm , and so far in season two it's been much better than average.

OPENING TITLES After lots of tweaks, re-edits and some rather awful music, finally the producers have whipped the opening titles into something quite good. Let’s hope they stay like this.

BEST LINE
Hank: “You believe the whole ‘redemption’ thing?”
Nick: “I don't know. But there's a Blutbad who did.”
(Made all the better for the ongoing – and very funny – suspicion the still-mindboggled Hank has for Monroe)