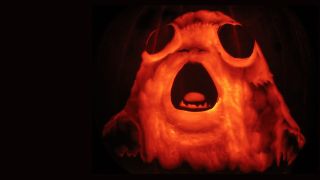 Carving an over-sized orange squash into a face sounds simple enough, until you realize all you have in the house is a butter knife and your art skills are somewhere around the level of a pug that's walked through a puddle of paint. That's what makes these ten edible masterpieces so damn impressive.

Got our pumpkins done up for our “Festival of the Lost” @DestinyTheGame #Destiny2 #destiny #HappyHalloween #pumpkin pic.twitter.com/5ddFZXOI2rOctober 31, 2017

My family still has no idea what overwatch is... but here’s my Reaper pumpkin head! @PlayOverwatch pic.twitter.com/oiXrQFXEQcOctober 29, 2017

My attempt at a pumpkin carving this year of The Night King. Spent way too long hunting down blue lights for this. 🎃😂 #halloween #pumpkin pic.twitter.com/fhHJ4Lrl0eOctober 31, 2017

Good effort from the other half on this year's pumpkin! 🎃 #Halloween #pumpkincarving pic.twitter.com/A4pGOE15wmOctober 31, 2017

My design class had a pumpkin carving assignment. The theme was "evil". Presented without comment. pic.twitter.com/xppjxnXQf3October 31, 2017

Guardians Of The Galaxy

I Still Want to Believe! My #XFiles pumpkin! pic.twitter.com/60zv7dFbEhOctober 30, 2017

When I don't design games I like to carve the occasional pumpkin. Here's this year's one, based on my favorite in the series. #metroid pic.twitter.com/AGr41xk4DbOctober 30, 2017

Sure, your kids are openly sobbing because you got mad trying to carving them a Mario who looks more like the Elephant Man, but help is at hand. Below is a list of best places to grab official stencils to make your own Halloween masterpiece.

If you already have a pumpkin that deserves a place on our list then let us know on Twitter, just @ us with a snap of your design. Who knows, pumpkin-based fame could be just a tweet away.