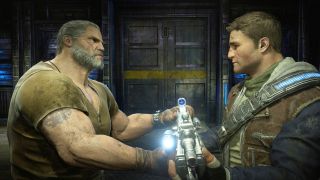 If you want to pick up an Xbox One S and Gears of War 4 together and you don't want your new console to look like it narrowly survived a bear attack, Microsoft has some more options for you. The company just announced two additional console bundles for the upcoming shooter, one in standard white and another in a comely teal, as well as bonus offer for the original Gears games.

The standard Xbox One S Gears of War 4 bundle will launch on October 11 worldwide for $349 /£299. It includes a white system with a 1TB hard drive, white controller, and a download code for Gears of War 4 - unless you buy it at GameStop, in which case it will have a physical copy. That's an extra-important distinction since Gears 4 is an Xbox Play Anywhere game and you'll only get the free PC version if you have a digital copy.

The US and Australia-exclusive Xbox One S Gears of War 4 Special Edition Bundle will also be released on October 11 (Update: It's actually coming out on November 1, sorry for the mix-up) and retail for $299. At that price point you only get a 500GB hard drive, but the console and included controller are a lovely shade of teal (Microsoft calls it "deep blue", but I know my crayons, dammit, and that's teal). They'll only be available at GameStop and the Microsoft Store in the US and will include a physical copy in either case.

Picking up any Gears 4 Xbox One S bundle, including the bear-attack Limited Edition one, will also get you a free copy of the entire Gears of War collection on Xbox 360 (with Xbox One backwards compatibility) "for a limited time". So you won't get the improved graphics and multiplayer of Gears of War: Ultimate Edition, but you can still enjoy the complete adventures of JD Fenix's dad at no extra cost. Also, Gears of War: Judgment.