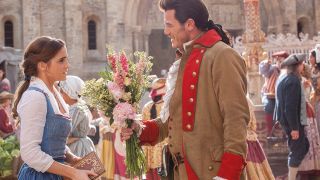 Beauty and the Beast, other than being one of Disney’s great love stories, is known for its campy villains and catchy songs. It may not be as iconic as ‘Tale As Old As Time’ but ‘Gaston’ is definitely a hum-worthy tune. Probably a good choice for Disney to show off in their latest clip, then…

When he’s not bothering Daisy Ridley for Star Wars: The Last Jedi spoilers, it turns out that Josh Gad actually does some acting in his spare time, too. Here he is wonderfully hamming it up as Gaston’s sidekick LeFou – and showing off a fair set of lungs in the process.

LeFou, like the stooge he is, is trying to rally the villagers around Gaston by bragging about his many, many skills. The animated version of the song was a classic and the live-action copy doesn’t seem too far behind in terms of quality.

Gaston himself, played by Luke Evans, doesn’t sing much in the clip but that’s probably because he’s a bit down in the dumps after being rejected by Emma Watson’s Belle. No-one sulks like Gaston…

If you want more Beauty and the Beast clips (and who can blame you?) the final trailer is full of Disney magic and well worth a repeat viewing (or twelve).