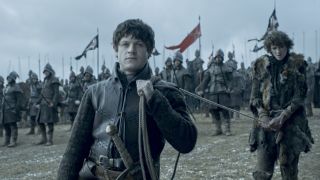 WARNING: This article is dark and full of Game of Thrones season 6 spoilers.

There isn't much television that's more violent than Game of Thrones - which has had its fair share of gory deaths in its 60 episodes to date - but apparently even the HBO show has its limits when it comes to depicting its characters' brutal demises on screen.

According to visual effects company Image Engine - who were responsible for all 72 of the deaths in Game of Thrones' sixth season - the (very satisfying) death by dog of Ramsay Bolton was meant to be even more gruesome. Supervisor Mat Krentz told Variety that his team created and animated a CGI jaw that would be ripped from Ramsay's face, but it was ultimately decided that the effect was too gruesome.

Check out a breakdown of Image Engine's season 6 work below...

I doubt many would have complained if Ramsay's death was more graphic, but the scene that made it to air still had the desired impact. Added focus on Ramsay's final moments might have detracted from Sansa's cold-as-ice enjoyment of her torturer's demise too, and that's arguably the highlight of the entire sequence.

Don't expect Game of Thrones to pull many more of its punches when season 7 debuts in summer 2017.