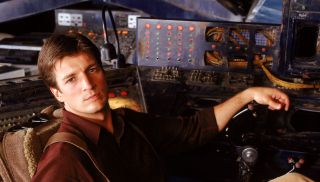 Firefly often comes up in discussions about TV shows that were cancelled too soon, and for good reason. The characters were all really well-drawn and the show had a great mix of action, humour, and imagination, helped in no small part by Joss Whedon's witty dialogue.

Ever since its unceremonious departure from the small screen the sci-fi show has garnered a sizeable cult following, and members of the cast occasionally assemble for Firefly panels at conventions. Such an occasion recently occurred at Long Beach Comic Con (via The Hollywood Reporter), and Captain Tight Pants himself Nathan Fillion had this to say in response to the oft-asked question of Firefly returning for more episodes:

"I totally get wanting more. I hear it all the time. "Is there going to be more? When is it? Could there be? What if there was?" And I get it. At the same time, we all had what I would call my dream job. It was the perfect position. Everything was great. Even the challenges we faced, we faced them together".

For their part, Jewel Staite and Sean Maher would be more than willing to get back onboard the Serenity: "Sean and I want more. Last night we had dinner and we were in an Uber and we were not talking about Firefly in any way.... You were on your phone and texting away and, I [said] something about Netflix.... And Sean said this, very absentmindedly, "I can't believe they haven't picked us up".

The chances of more Firefly episodes or a sequel to 2005's Serenity is extremely unlikely at this point, and maybe that's for the best. Not only have the cast moved on but the show is a pretty perfect season of television as is, and bringing it back for more could tarnish that legacy. If you are in dire need of a Firefly fix though, the franchise has continued in comic books (which are canon). Or you could just watch the episodes again...