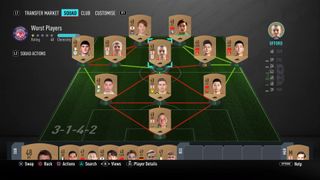 You might think that there’d be little value in a guide to the FIFA 20 worst players – but you’d be wrong. Many elite FIFA 20 players swear that having three terrible bronze cards on your subs bench improves your chances of getting a winnable Division Rivals or Weekend League match-up, as it (allegedly!) tricks the game into downgrading your Ultimate Team’s overall ability. Even if you don’t believe in that, there can be no greater challenge than trying to win matches with a squad full of genuinely awful bronze cards. Fancy taking your chances? Then read on for your essential guide to the FIFA 20 worst players.

The Bantams’ 20-year-old reserve keeper is yet to make a first-team appearance for the club, and has spent the last two years on loan at Stalybridge Celtic, Stafford Rangers and Guiseley. While that low FIFA 20 rating may sting, there’s still a degree of promise: Sykes-Kenworthy was named Bradford’s youth team player of the year in 2017-18.

Like Sykes-Kenworthy, this young Burton prospect shouldn’t get too downhearted about his FIFA 20 overall rating - he only signed his first professional contract in May 2019. “It is lovely to see another three [Academy graduates] coming through,” said manager Nigel Clough as Morley put pen to paper alongside Albion comrades Ben Hart and Ethan Vale.

Aged just 19, Irishman Callan already has some experience under his belt after making 15 appearances for Wexford in 2018-19 – although he was sent off in his final appearance. He won the Irish U17 league in his first season with Shamrock, but has struggled to break into the first-team since – hence that painful FIFA score.

Already 22 yet with only two career appearances under his belt, Xiao does not appear to be a long-term bet for FIFA glory. Still, you could pair him with some fellow bronze cards from our FIFA 20 fastest CBs guide to form a fun, if a bit rubbish, East Asian squad. Especially wince-worthy attributes include positioning (23), finishing (20) and long shots (20).

The Chinese league is well represented in this particular feature, with Tao next to join countryman Xiao on the list. Hey, at least it makes for decent chemistry. He offers a little more hope for the future: he’s only 17, but has made 15 first-team appearances this year and been capped by his country at U17, U18, U19 and U20 levels.

Tao’s 19-year-old club mate doesn’t seem set for quite as an illustrious career as his buddy on the wing. He’s only clocked up two first-team appearances, for a grand total of nine minutes off the substitutes bench. Ouch. If you do plan to use him in FIFA 20, be wary of Zhang’s vision (38) and crossing (32). Also note there’s a 59-rated left-back with the same name.

Gresty Road season ticket holders, look away now. Despite sitting in the League Two play-off places as I write this, The Railwaymen have two players in this FIFA 20 worst XI. The first is Offord, a second-year pro plying his trade for Alexandra’s under-23s, who in real life can play across the back four as well as at CDM. He’s yet to feature for the first team.

Joining club-mate Offord on the FIFA 20 worst players list is a lad who scored his first goal in senior football while on loan at Witton Albion in October 2019. It’s a tidy finish, too - watch it here. Heath has also spent time on loan with Newcastle Town, and signed his first professional contract with Alexandra in the summer of 2019.

From a FIFA 20 perspective, Irish eyes aren’t smiling on the Harps’ wideman - his in-game ratings include 57 sprint speed, 49 dribbling, 34 finishing and 40 crossing. Yet real-life suggests the 19-year-old is one to keep tabs on, regardless of his videogame flaws: Gallagher was called up to the Republic Of Ireland U19 squad in 2018, and made his full league debut in April.

A golf clap, please, for the man who claims the honour of being FIFA 20’s worst striker in world football. 20-year-old Shirai netted five times in 39 games for Gamba Osaka’s U23 side, but is yet to gatecrash the first team, and as a result earns ratings of 52 positioning, 51 finishing, 56 pace, and an incredible 12 (twelve!) standing tackle.

Fittingly we finish on yet another CSL player - again boosting chemistry should you choose to build this squad in FIFA 20. Shan is already on his third club at the age of 20, and spent two years in Portugal with Vitoria Guimaraes before returning to China without registering a single goal. With ratings of 33 for volleys and 39 long shots, don’t expect him to turn that form around in Ultimate Team.