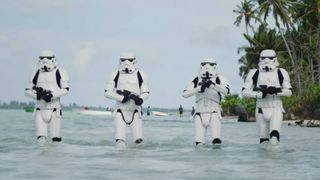 Star Wars: Rogue One had its fancy Hollywood premiere last night, complete with X-Wings and Stormtroopers on the red carpet.

That means we get some early reactions to the first spin-off movie in the Star Wars universe. These are all spoiler-free but so far people seem to be extremely happy with the movie. There's plenty of praise for its action, emotion, relationships, plus its authenticity to the originals and war movie feel.

And if Wil Wheaton says it's good. It's good.

#RogueOne is FANTASTIC. Incredible action, both planetary and interstellar, and looks GORGEOUS. Most importantly, it feels like Star Wars.December 11, 2016

So... #RogueOne? It's freaking great! So many crowd-pleasing moments! It's emotional, exciting and incredibly satisfying. Loved it!December 11, 2016

Holy craps @starwars #RogueOne was absolutely incredible. See it as soon as you can!!! Gareth Edwards I LOVE YOU. https://t.co/84ap5m3rwbDecember 11, 2016

People worried about #RogueOne not being a gritty war film need not worry. It's intense, relentless. You can practically taste the grit.December 11, 2016

I expected it to be funny. I didn't expect to be choked up. Moments of true bravery, and some speeches we need right now. #RogueOneDecember 11, 2016

My thoughts on #rogueone This is the movie you were looking for. Great way to bind the galaxy together. #StarWarsDecember 11, 2016

Directed by Gareth Edwards and starring Felicity Jones, Diego Luna, Ben Mendelsohn, Forest Whitaker, and Mads Mikkelsen, Rogue One: A Star Wars Story is released in the UK on December 15 and the US on December 16.