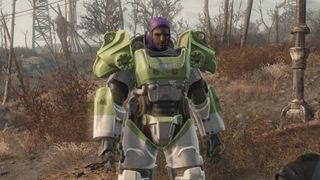 It's been almost a year since Bethesda officially unveiled Fallout 4, and with it, the promise of mods on home consoles. Well friends, the wait is nearly over. Fallout 4 for Xbox One and PS4 will support mods much the same as the PC version does starting this summer. Xbox One is first in line, with mods planned to launch on Microsoft's console in May, while Sony's PS4 will get mod support in June.

By using the Creation Kit, the same software used by Bethesda to create Fallout 4, players will be able to craft virtually anything on PC and port it over to console. Time to get used to baby-launchers, people with cats for heads, roaming Thomas the Train Engines, and more. But at least, if the video above is anything to go by, it'll look nice and clean, and having it right there on the menu is hassle-free.

If you already have a PC copy and want to get a head start, you can start building your mods for consoles now. Simply download the Bethesda.net launcher, log into Steam, right-click on Fallout 4 in your Library, select Properties, and then select Betas. Select beta from the drop-down menu. Fallout 4 should update, and appear as Fallout 4 [Beta] in your Library. Enjoy, and mod (ir)responsibly.