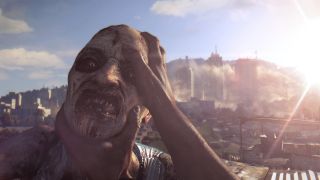 2015's Dying Light, to the surprise of anyone but those who played it, has quietly become one of the most successful games of this console generation, with thousands of people still regularly logging in to play the open world zombie slaying sim even today.

That's thanks to developer Techland's healthy post-launch support for the game over the last four years, with barrels of DLC, quality of life updates, and a full blown expansion in the form of 2016's The Following story campaign all keeping the experience feeling fresh. Even now, as the studio squirrels away on Dying Light 2, Lead Designer Tymon Smektala has confirmed that Techland isn't finished with its predecessor just yet.

On The Radar: Dying Light 2 – An exclusive look at one of the most anticipated action games of the generation

"I am not sure how this year stacks up [for Dying Light]", admits Smektala, in a recent interview with GamesIndustry.biz. "We did the '10-in-12' campaign last year, which was 10 DLCs that we released over the span of 12 months. So I'm not sure about this year, because it's time to focus on Dying Light 2. But we had a meeting right before E3 2019 where we said we still wanted to add things to the first one. And there's now a small team which is working on additional stuff that will happen in Dying Light."

Better yet, Smektala's comments suggests though Dying Light has and continues to be the proving ground for some of Techland's crazier ideas for the sequel, allowing them to test out certain systems and features before deciding whether to implement it in the full game. "If we had an idea we're unsure about for Dying Light 2, we could mimic that idea to some extent in support of the first game and see how it works." he explains, adding that this allows Techland to "see what people find attractive and what's unattractive to them."

It's unclear if Smektala is suggesting previous Dying Light DLC has already made its case for appearing in the sequel, or whether Techland plans to test future content ideas through Dying Light in the future, but it would certainly explain some of the crazier things we've found in the original game, including Nightmare Mode and a friggin' two-handed axe. Hopefully we can expect even sillier stuff for Dying Light 2.

For more, check out our Dying Light 2 E3 2019 preview right here, or watch our Release Radar video below for a guide to everything else out this week.