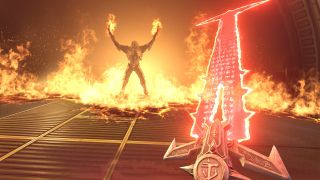 Doom 2016's campaign was a nearly flawless rollercoaster of heavy metal massacres,which made its multiplayer mode feel all the more vanilla by comparison. With Id Software building both sides of Doom Eternal itself (initial development of Doom 2016 multiplayer was contracted out to external developer Certain Affinity) the studio has recommitted to making every part of the experience "very Doom" both online and off - and that extends beyond the campaign and its Dark Souls-style invasions.

GR+'s resident Doom Guy David Houghton spoke with both Doom Eternal executive producer Marty Stratton and creative director Hugo Martin at QuakeCon, and though they had to remain cagey in terms of specifics, they did confirm that there will be much more Doom multiplayer to see in the future.

"We kind of teased the invasion stuff, which is something we're really excited about," Stratton said. "I think people are gonna love it once we start to dive into the actual mechanics of it, it's very different. There's a lot more to it than what we just showed there. That's one component. And then we are working on a PvP component that we'll talk about down the road, but it is also very Doom. That was a big focus for us coming away from 2016. Everybody loves the Doom dance, loves the slayer versus demons combat, how do we make that a social experience, not a sidecar experience?"

"Social games" remains an unfairly maligned term after everybody got tired of farming on Facebook, but Doom Eternal inviting you to go possess a giant demon and mess with your friends or strangers sounds like great way to keep in touch. What about that other PvP component, though? There was nothing explicitly wrong with Doom 2016's multiplayer aside from some missing features - and the SnapMap creation tool was super clever, though it sadly won't return - it just failed to grab much attention in a very competitive online shooter scene. Where do you go from there?

Hugo Martin demurred at first, saying he "can't wait to talk about PvP, because it's awesome." But what he said next may give you a little hint at what Id is thinking (with my emphasis added).

"Being the demon [in Doom 2016 multiplayer] was fun. And they're part of our brand, they're the characters in our universe," Martin said. "It's slayers versus demons, that's the whole point of the brand, so why not, if we're looking for a way for people to be able to experience the Doom dance with their friends, why not use them? You don't have to be a Slayer or that type of character to join in on the fun. Why not play the antagonist?"

Martin went on to talk about how some players prefer taking control of demons, because it has a very different feel from the frantic action of the Doom Marine. The conversation was spurred on by the invasions (which Stratton confirmed you can disable if you prefer) but Id's clearly putting a lot of thought into the "you are the demons" angle. It makes me wonder if the unspecified PvP mode will do more with that - maybe we'll see an entire asymmetrical competition between a big team of demons and a small team of slayers? That'd be pretty rad, and most importantly, still "very Doom."

Check out 5 game-changing details from the first Doom Eternal gameplay to learn more about the game.