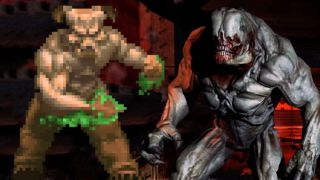 Doom's demons are what make the series work. Sure, sprinting around a space station with a Super Shotgun in hand is thrilling, but if you don't have interesting targets to blast into a cloud of gore, what's the point? The minions of Hell are what give Doom its spicy, pulse-quickening flavor, with designs that are both threatening and intriguing. You have to remember that, for many gamers, Doom was their first-ever exposure to first-person shooting - and its enemies are what made the experience so profoundly vivifying. As you viciously unload clip after clip into hordes of growling Hellspawn, you're getting a subtle crash course in the core dynamics of the entire FPS genre.

Anyone who has played the new Doom will be aware of the graphically stunning blood-and-guts confetti that results when demons and Doomguy meet. It's humbling to think that all those enemies started out as pixelated scans of clay models. And many of those demons stand the test of time, re-emerging in the new Doom with their designs - in both form and function - surprisingly intact. So, enjoy this retrospective of Doom's demonic bestiary, from the original games to Doom 64, Doom 3, and the 2016 entry in id's legendary franchise.

These slain-then-reanimated space marines are the perfect introduction to Doom's crusade of carnage; as the very first enemy you encounter, they convey a massive amount of information about this virtual world. Their human frames evoke the Nazis of Wolfenstein 3D, and as with mowing down the SS, their undead status enables guilt-free genocide. But the Zombieman's guttural, beast-like growls and groans of pain are much more alarming than any German exclamations, commanding your attention while still acting as the most minimal, easily handled threat in the game. And seeing them in-fight when one of their ranks engages in friendly fire is utterly mesmerizing (and advantageous).

Doom 3 stumbles because it tries to put more focus on jump-scare-enabling civilian zombies lurching at you from the darkness, instead of the rare undead soldier who can actually shoot back. Turns out, the original Zombieman is the perfect embodiment of a minor, retaliating threat. These grunts are easily killed, but still problematic when ignored. As true in new Doom as it was back in '92.

The Imp's importance to Doom's fundamentals cannot be overstated. As the second enemy type you encounter after the Zombieman (still in the opening level, mind you), Imps are your first real taste of the supernatural horror that awaits on the rest of Mars. Their spiky bodies and propensity to fling fireballs clearly signal that yes, these are the armies of Hell walking in your presence. And those fireballs are an ingenious teaching method: they force you to learn how to strafe out of harm's way or suffer third-degree burns. Unlike the Zombieman's bullets, Imps' projectiles present visually distinct hazards, which fly just fast enough to test your twitch reflexes without being imperceptible.

Doom 3 tweaks that design slightly, giving Imps the ability to climb along walls, and bolstering their trademark fireball flinging with a pounce attack that's much more aggressive than the original's 'slowly waddle towards you to get within punching range'. The new Doom retains Doom 3's springy, more agile Imp design, acting as a barometer for the player's ability to dodge out of the way of incoming ranged or melee attacks at a moment's notice.

These beasties are actually just 'Demons', but most everyone calls 'em Pinkies - partially because of the pig-like pigmentation of their flesh, but mostly because Pinky is an infinitely more delightful name. Just as Zombiemen and Imps embody invaluable FPS intelligence, the Pinky introduces fledgling players to a new kind of threat: the bullet sponge that rushes in your direction until one of you is dead. One Pinky is reason to be afraid; a pack of them indicates that it's time to either run away or carefully use the environment to funnel them into a manageable procession towards the warm, welcoming barrel of your Super Shotgun.

I guess a bright pink bipedal demon felt too outlandish to be a part of Doom 3, so the classic Pinky got replaced by a four-legged, dog-like meld of demon flesh and robotic hind legs. But id and Bethesda heard my nightly prayers and restored my most beloved Hellspawn buddy to his rightful form in the new Doom.

For most people, the sight of a naked, grotesquely obese man with elephant legs is not their idea of a good time. Turns out, it's even worse when they've got two rocket launchers for arms and a limitless supply of ammunition. Fighting the Mancubus is the organic tutorial to the ins and outs of splash damage, given how it fights with - and is easily killed by - rockets. The concept of extra damage invisibly radiating out from a rocket's point of impact is a basic FPS law we know and love now, but in Doom's day, it was a principle that had to be learned.

It becomes apparent - probably after a few instances of kamikaze-esque self-disintegration - that trying to blast a Mancubus with rockets from point-blank will kill the both of you in a hurry. Best to plug its rippling belly with some shotgun or chaingun rounds, saving those rockets for rooms full of lesser enemies. The new Doom gives you another option: set it up for a melee execution with a few potshots, then force-feed it its own explosive heart for gut-busting results.

Fun fact: the original Cacodemon design is heavily based on the cover art from a Dungeons and Dragons manual (which I highly doubt id ever paid royalties for). Cacodemons are like Imps on steroids, spewing fireballs at a faster rate and surviving way more punishment. The Cacodemon's cyclopean glowing eye, ominous blue-mouthed grin, and sheer size - often taking up a huge chunk of your screen - can make even the hardiest space marine freeze in terror at first sight. But doing so ensures certain death, so you're forced to adapt. After slaying your first bushel of bulbous Cacodemons, you'll realize that you've been honing the skills needed to down these big red blimps just by mowing down the previous enemy types.

Like the Imp, the Cacodemon's ranged attacks often force you to backpedal while shooting, which becomes an invaluable tactic for any firefight the more you get used to it. But their hovering freedom of movement also trains you to keep your eyes peeled for any overhead threats that could swiftly close the distance on you. The new Doom's slightly smaller Cacodemon patrols the skies in much the same way.

These resilient brutes are available in two flavors: the tan-skinned Hell Knight, or the pink, beefed-up (and doubled-up) Baron of Hell. Either way, you're going to have a tough time dealing with their massive health pools, ranged fireballs (this time in lime green), and devastating wallops up close. Besting them is a matter of preparedness, because if your ammo supply isn't well-stocked when a Hell Knight rolls up, the fight will be over before it's even begun.

The Hell Knight is undoubtedly the most iconic monster in Doom 3 (appearing front and center on the box art), with a muscular, hulking redesign that looks like it could crush the original goat-man sprite with a single swipe. New Doom repurposes this design with a cleaner, bone-colored noggin, while maintaining the Herculean physiques. This new breed of Hell Knight has a bigger focus on melee aggression too. Get the chainsaw out!

Revenants are something of an anomaly: an enemy that's just as deadly from afar as it is up close. Those twin shoulder-mounted rockets aren't just for show, and can obliterate your health from long range, but the Revenant will gladly punch you to death if you try for some close-quarters combat. Engaging them can be a frustrating experience at first, as you desperately try to figure out the most effective distance to mount your attack.

Then comes an epiphany, the kind that can only arise from brilliant game design: you need to confuse the Revenant by dancing between its two attack ranges, like a boxer darting away from and into dangerous punches at just the right moment. Of course, you'll need to be fast if you want to survive, because it can easily match your pace with its speedy footwork. And in new Doom is zips around the map, constantly bombarding you with missiles until you've wiped it out.

If Doom's bestiary is like a lesson plan, then the Cyberdemon is your final exam. This colossal, rocket-armed, cyborg minotaur has it all: the deadly projectiles of the Mancubus, the erratic zig-zaggy movement of a Pinky, the imposing size of two Cacodemons stacked atop one another, the speed of a Revenant, and the immense survivability of a Hell Knight. Oh, and it doesn't take splash damage, so you can just forget about spamming your stash of rockets and calling it a day.

But then, taking down a Cyberdemon should never be easy, given that it's typically been given final boss status throughout the series. It was an iconic-enough enemy to have been the first actual 'thing' revealed for the new Doom, but is used sparingly in the final game.