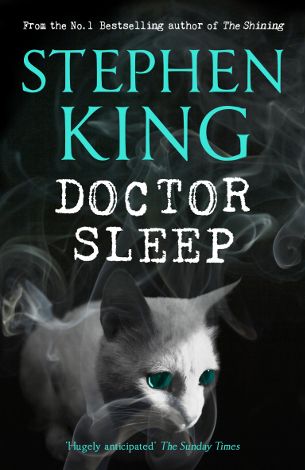 In 1977 The Shining established Stephen King as the preeminent voice in horror, a field that was, back then, very strong and which now comprises mainly him. Among King’s very best works, it’s a terrifying ghost story in which psychic child Danny Torrance is trapped in the haunted Overlook Hotel with his increasingly insane, alcoholic father and a whole load of spooks.

King doesn’t do a great many sequels, but this is one of them. Set in the present day, Doctor Sleep follows the grown up Dan as he wins his own battle with the demon drink, only to come into conflict with a band of psychic vampires.
All of King’s usual strengths and weakness are here, as are all his usual tropes. King writes masterfully, as always, and cheats a little, as usual. A couple of times his characters are aware of some important plot point, but King doesn’t reveal it to the reader until its dramatic impact will be greatest. That feels a little forced in the work of an author who otherwise lets us into his characters’ every thought, but this is King, and you don’t care.

For the truth is, there are few writers who have such a way with character (and that character, delivered through authorial peeks into thought and feeling, is so important to his books, explains why they are so rarely well adapted to the screen). Once his stories get their hooks into you, they’re impossible to put down.

The story briefly touches on the aftermath of the Overlook inferno, with a young Danny meeting his mentor Dick Hallorann. We’re then into a sketchy detailing of Danny’s life as he turns to drink to dull his abilities, does something he comes to regret, and eventually finds a kind of peace. Dan settles in Frazier in New Hampshire, where – now off the booze – he uses his “shining” to help the inhabitants of a nursing home die peacefully, earning himself the sobriquet “Doctor Sleep”.

When a “shining” girl is born in a nearby town who’s even more powerful than Dan ever was, she attracts the attentions of The True Knot, Winnebago-riding oldsters who torture psychic children to death in order to eat their essence. Danny is drawn into her struggle.

Circularity is the key theme, as is choice within our prescribed fate, with Danny becoming an alcoholic like his father, then a teacher, like his saviour. It’s an idea that’s subtly and admirably reinforced throughout. This is noticeably the work of an older man; all King’s works deal with death, but at the heart of Doctor Sleep is the acceptance of death, appreciating what you have, and finding joy in the next generation. The True Knot are great monsters because they’re set in opposition to all this. Cleverly, King makes them sympathetic; they just want to live, but their “enjoyment” of the young is unwholesome and they’re damned because they defy mortality.

If you’re wary of reading yet another King story about an alcoholic finding his place in small-town America, don’t be. Here we know the reason for the protagonist’s love of drink. Seeing Danny as a gifted/cursed boy means we feel for him as an adult – Torrance Jr is King’s best alcoholic yet.

King has been compared to Dickens, but he’s closer to Ray Bradbury. Although King will probably never quite hit Bradbury’s heights of prose, there’s a similar lyricism here, and the same bittersweet melancholy about the transient nature of life that suffuses Bradbury’s work. The denouement of the novel takes place in autumn, and that’s no coincidence. You can practically smell the leaf piles burning, their fragrant smoke mixed with that of funeral pyres.