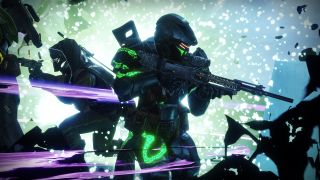 At its best, Gambit is one of the most exciting activities in Destiny 2. It's a fast-paced mix of PvP and PvE, and between clutch invasions and desperate Primeval melts, it's a factory for come-from-behind victories. The same is true of Gambit Prime, an expanded version of Gambit with more defined rules and more nuanced mechanics. As a four-player game with several stages and mechanics, Gambit is also one of the more complicated activities in Destiny 2 - or at least one of the easiest to screw up. So, we've put together some Destiny 2 Gambit tips to help you avoid common pitfalls and improve your win rate on your path to becoming a Dredgen (or just completing the weekly Gambit bounties, your choice).

Bank your motes and don't get greedy

The basic Gambit loop is pretty simple: kill dudes, get motes, bank motes, repeat until Primeval. Banking motes is a pretty key part of that process, and it's the one you'll see people mess up the most. It can be tempting to hoard motes and go for a big 15-cost Blocker, but more often than not, you're better off banking your motes early. Holding motes leaves you more vulnerable to Invaders, and it can delay your team's invasions. Even if you're sitting at eight or 13 motes, it's probably better to get those motes in now, especially if the next wave of enemies is far away. This also leads nicely into our next tip…

Watch the mote counter to predict invasions and Blockers

The blue and red bars at the top of the screen show how many motes both teams have banked, and the white portion on them shows how many motes each team is currently holding. It's important to keep tabs on the white bar for several reasons. It will show if you or the enemy team has enough motes to invade the other side or summon the Primeval, for starters. This will also alert you to prime times to invade - that is, when the enemy team is holding lots of motes. (Don't just invade the second the portal opens!) Likewise, if the enemy team is holding a lot of motes, you'll know that Blockers are on the way and you should get ready to defend your bank.

Let teammates pick up motes for you

This is especially relevant if you're playing Gambit solo, but even in teams it's important to coordinate mote pickups. You get access to a stronger blocker every five motes, and each wave of enemies rewards a set amount of motes, so it's more efficient to distribute your motes evenly in increments of five. In other words, if you have five motes and your friend has three motes, leave the two motes on the ground to them. And if you are playing solo, sitting back and leaving the motes to your teammates will concentrate your motes and guarantee stronger blockers. It's better to have three players with five motes than four players with three or four apiece.

The first invasion is critical

Gambit matches can snowball very quickly, and the easy way to get that ball rolling is banking 25 motes before the enemy team, invading early, and cleaning them for all they're worth. Your presence as an Invader will throw a wrench in their plans, and if you can nab just five motes, you can seriously set them back while giving your team more time to push for the next invasion. This strategy is even more effective if your team can chain Blockers by banking more motes whenever the enemy team kills their last Blocker.

Use your super liberally

We've talked a lot about invasions so far because it's the PvP element of Gambit that tends to swing matches, so here's a golden PvE tip: use your Super. If you're using something highly specialized like Well of Radiance, sure, hold it for the Primeval phase. But any roaming or AoE Super should be used to clear enemies. Nova Bomb a juicy group of red bars, Blade Barrage a high-value target, Thundercrash some Blockers - put your Super to use. You'll probably build another Super by the time the Primeval is up, and you'll make Orbs of Light to fuel your teammates' Supers.

If you don't have many motes, go fight the Invader

It's important to remember that the Invader is just a normal Guardian with an overshield and wall hacks. You can put them down with a well-placed shot or Super, so don't feel like you have to retreat whenever you get invaded. If you're holding a bunch of motes or aren't confident in your sharpshooting, it totally makes sense to hang back. But if you've only got a few motes, get out there and stand your ground. Even if you don't kill the Invader, you can at least slow them down and defend your teammate who's holding 15 motes.

Don't dump everything into the Primeval immediately

Once your Primeval is up, you can be invaded repeatedly until it dies, and every invasion is an opportunity for the enemy team to heal your Primeval by killing you. So if you dump all your Supers and heavy ammo into the Primeval but get wiped out by an Invader, your Primeval will be back to full health and you'll be out of juice. With that in mind, unless you're with an extremely well-coordinated team capable of insta-killing the Primeval, hold off before laying into the Primeval. At the very least, let the first Invader come through while the Primeval is still at full health. They'll waste their time and you'll build more stacks of Primeval Slayer, so when you do pop the cork and melt the Primeval, you'll do more damage more safely. Waiting will also give you time to clear out the trash mobs in the area.

We've got a few Gambit Prime tips to follow, but before that, here are some rapid-fire pointers that will help you out in all things Gambit:

Don't be stubborn about your role

Thanks to the role-defining armor available from The Reckoning, Gambit Prime players can choose to be Reapers, Sentries, Collectors, or Invaders. Which is great! Choosing and playing a role gives Prime another layer of strategy over traditional Gambit. That said, you won't always be able to play the role you want, even if you're geared for it. Sentries and Reapers can pretty smoothly work together, but having multiple Collectors and Invaders on one team can lead to some headbutting. If you and a teammate wind up overlapping, just play nice and share the limelight. You can still kill enemies and grab motes while wearing Invader armor, so just do whatever you can to help your team.

Speaking of Invader armor: if you see someone wearing it, let them grab heavy ammo from the ammo boxes around the map. Invasions are especially impactful in Gambit Prime thanks to the Invader armor perks, and heavy ammo is the easiest way to lock in a few kills. Of course, if your designated Invader isn't around, it's better that you grab the heavy and put it to use instead of letting it gather dust. Just use your best judgment and give the Invader the right of way, so to speak.

The enemies in Gambit Prime are quite a bit tougher than in normal Gambit, especially the yellow-bar ultras that accompany later waves. You'll encounter giant Shriekers, Wizards, Chieftains, and more, and these things freaking hurt. They can kill you in no seconds flat, and they make collecting motes a living hell, so focus-fire these ultras whenever they spawn. They're also worth tons of motes, which is always nice.

I don't know what it is about that yellow Sentry armor, but when some people see it, they just assume they can leave all the Blockers to their Sentry. Turns out, Prime Blockers are freaking hard to kill, especially if they stack up and you're low on special ammo. So, take it from a Sentry main: we won't get mad if you help us kill the Blockers. It's our job, and we're on it, but nobody ever complained about a friend helping them move a couch, if you see what I mean.

Just as you should time your Primeval DPS to minimize the danger of being invaded, it's important to make the most of the limited DPS window you get in Gambit Prime. When you kill the third Primeval Envoy, a Well of Light will appear for a short period of time. You have to be in the Well to damage the Primeval, so don't kill that last Envoy until you're ready for showtime. If your teammates are scattered around the map, be sure to group up beforehand. If you know you're about to be invaded, let the Envoy live until you deal with the invader. You'll do more damage to the Primeval in the long run, and you'll stand a better chance of locking in that damage.

Oh, and in the same vein, don't dump everything into the Primeval on the first DPS go-round. The Primeval Slayer buff builds more slowly in Gambit Prime, so save your One Thousand Voice, Well of Radiance, Celestial Nighthawk, or what-have-you for the second round at least.