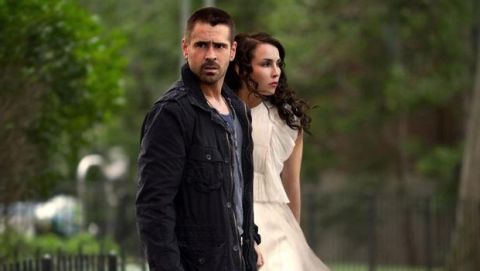 Marking the English-language debut of Niels Arden Oplev (the original The Girl With The Dragon Tattoo ), Dead Man Down is, on the surface, a fairly standard revenge thriller; a sort of brooding, steel-gray Death Wish with Colin Farrell as a good-looking Charles Bronson stand-in.

However, from the moment it begins, it drags you into a curious world where nothing is ever fully explained, where you’re forced to piece together an interweaving story from scraps of information, all of it leading up to an endgame most Hollywood movies would just telegraph in the first five minutes.

Farrell is a Hungarian engineer named Victor whose family was executed by a slickster drug-lord (Terence Howard) with a dandy name (Alphonse).

Naturally, Vic has dedicated his life to assassinating Alphonse’s crew, saving the top villain for last.

His vengeance scheme is temporarily thwarted when his disfigured neighbour Beatrice (Noomi Rapace) finds him out and threatens to spill the beans, unless he helps her with her own twisted plans for revenge against the creep who scarred her.

From there, the twists pile high. The last act does a dizzy 180 into John Woo-esque mega-violence, essentially obliterating the film’s shadowy mood into a billion bloody shards.

This is good news for everyone who fell asleep a half-hour before, but feels like an over-reach, like the scribbled notes of a Hollywood suit demanding more crunching bones and spraying bullets.

Still, even with its uneven tone, there’s a lot to like. The hazy tech-noir gloom of the first half is hypnotic, with Rapace’s crazy-eyed Beatrice adding a layer of uncanniness rarely seen in mainstream thrillers.

Meanwhile, the skull-smashing finale is, if nothing else, attention-grabbing.

In an era where CGI and destruction-porn can often trump idiosyncrasy, it’s refreshing to see a director like Oplev ladling a tasty dollop of high weirdness into the mix.