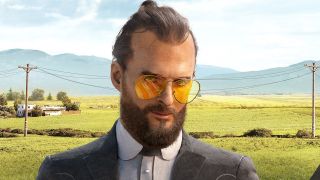 It's Friday, and the last thing I thought I'd have to be writing about is pee, but here we are. Here's all the hottest, soggiest news from the world of games and entertainment. Just remember to wash your hands.

Ubisoft may have spent a lot of time trying to avoid getting too political with Far Cry 5's marketing, the developers couldn't help but squeeze in a bit of current affairs mischief. Polygon reports that a mission called Patriot Acts has a special agent contact you about retrieving a certain video tape, and is full of cheeky references to wet work, wetting the bed, and a yellow brick road. Sounds like it'll be fun to find when urine the game.

Street Fighter is ready to smash up your TV

The people who made live-action web series Street Fighter: Assassin’s Fist have been signed up to work on a Street Fighter TV show, with Capcom's blessing. "After a long search, guided by the team behind Assassin’s Fist, we are delighted to be partnering with a company with the outstanding TV experience of Mark Gordon and eOne. They have the credentials to help us launch a faithful adaptation of Street Fighter as a major TV series," the studio's Yoshinori Ono told Deadline. You can get an idea of how the new TV show might look from the trailer for Assassin's Fist.

EA puts the words "Star Wars" and "open world" together

EA has dealt with lots of Star Wars flavored drama lately, from the cancelled Hennig project to loot boxes, but it's not giving up just yet. A new job post spotted by Gamespot wants a lead online engineer for "a Star Wars Open World project" who'll work on things like ensuring "designs will maintain high-traffic services for multi-platform games."

Oxenfree was a perfect slice of science fiction gaming, and the follow up from Night School Studio looks like it could be devilishly special too. It's not out until 2019, but you can get a glimpse of Afterparty below.

A new PlayerUnknown's Battlegrounds map and what's next for PUBG, revealed by Mr Unknown himself

Binging Sea of Thieves this weekend? Watch out for scheduled maintenance